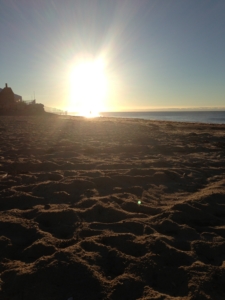 This is an example of an idyllic morning. Matt’s alarm clock is the opposite of this.

Since I have known Matt he has had the worst alarm clock in the world.  It screeches in the morning and glows a bright red during the night.  The alarm clock has been the subject of many debates.  He thinks it is the greatest alarm clock because the horrifying sound that escapes in the morning would wake the dead.  I think hearing that noise that resembles a fog horn screaming in terror is a terrible way to start the day.  I also think that if you want to get up at 5:30 A.M., you should set your alarm clock for 5:30, because once I’m up, I’m up.  Matt thinks if you want to get up at 5:30 you should set the alarm for 5:00 A.M.  That way you can hit snooze three times.  His logic means I’m up thirty minutes earlier than I need to be.

Thankfully, for the most part, thanks to the smart phone, we haven’t used this […]