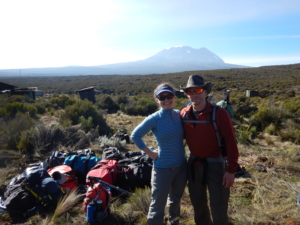 We are currently standing on Mt. Kili with the peak behind us. That’s how big the mountain is.

Hiking Mt Kilimanjaro was a spectacularly grand adventure and simultaneously self-inflicted torture.  On the first night I accidentally peed in my sleeping bag and broke my headlamp.  The sleeping bag and headlamp were both much needed tools on the mountain. 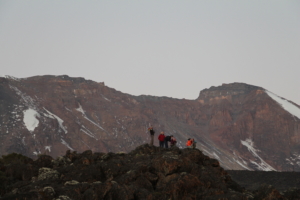 That’s me and Matt sitting on the right in the orange jacket. Photo from ready_freddy_123 on Instagram

On Day three I wrote in my journal: When you look back on this trip as a positive experience, remember it is not.  You are miserable.  This is terrible.  You did this to yourself.  Vacation normally flies by but if you want vacation to pass slowly hike Mt. Kilimanjaro.

That was a breaking point for me.  I’d been up the first two nights shivering.  Lack of sleep and freezing nighttime temperatures forced me to figure out how I needed to get by on the mountain.  That night I put on nearly all my clothes and threw some heat warmers into my sleeping bag and finally slept.  A good night’s rest is a fabulous thing. 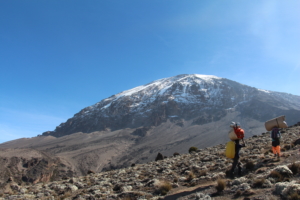 Sleep and keeping warm made days four, five and six much better for me.  But that’s when others in our group started going downhill.  There was vomiting and diarrhea happening all over camp.  But to everyone’s credit they pushed through.  My stash of Imodium made me a very popular person on the mountain.  Two Imodium can get you a full-sized Snickers on Mt. Kilimanjaro.

Having been in high altitudes, I anticipated struggling on day four when we hit 15,000-feet.  But I wasn’t having a tough time.  I was doing great.  Well, I call it mountain good.  All movement is slow.  At sea level you’d think something was wrong with you, but the mountain has a different wellness scale.  If you aren’t vomiting or crapping your pants, you are doing great on Kilimanjaro.

Trying to trek across the dusty trails of Mt. Kili is the most humbling experience I’ve ever had.  There I was feeling impossibly cold with all my gear from EMS, REI and Cabela’s.  I was exhausted and unwell a lot aka “mountain good.”  But the porters would get up in the morning, give us tea, prepare us food, break down camp, pack up camp, carry all the parts of camp plus water to the next camp hours before our arrival, set up camp, start dinner, transport our private toilet and clean that toilet daily.  That’s what they did.  Some of them wearing only penny loafers and long-sleeved t-shirts. The rest of us had the goal of getting ourselves from point A to point B.  And when we arrived at camp, the porters sang for us.  My personal struggles and watching what the porters did, often with a smile, reminded me how easy my life at home is. 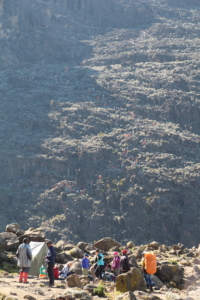 Look closely for little specs. Those are people zig zagging up that wall. Photo thanks to ready_freddy_123 on instagram.

Day five I conquered the Barranco Wall.  I didn’t know it was coming, but it’s basically hours of switchbacks up the edge of a cliff.  Most of our group thought this was the best day on the trail.  It was certainly the most fun to hike, but I’m terrified of heights.  If there wasn’t a whole team of people assuring me it was safe and porters walking with objects balanced on their heads, I may have turned back.  And when someone in your group is vomiting at every switchback while the guides hold her hair back, you put on your big girl panties and tell yourself, “if she can do this, I can do this.”  We each had our own battles to fight on any given day.

Though we all had a lack of appetite, our meals with our fellow hikers were some of our best moments along the route.  We laughed, we teamed up against the guides who wanted us to eat more, we warmed our fingers under our butts and on cups of tea before trying to read our oxygen levels, and we talked about our bodily functions as if that was normal dinner conversation.  In an instant we became family with strangers.

On summit day, the guides wake you up at 11pm to start hiking at midnight.  You try to get some sleep the night before.  I’d been so nervous about reaching the top of this mountain, and right before falling asleep I thought, “I’ve been so worried about this hike and I’m doing so much better than I expected.  I’m going to do this tomorrow.  And it’s going to be really emotional when I get to the top.”  With that thought came a sense of calm.  The most peace I’d felt on the mountain at night.  The most peace I’d felt about this entire trip in months.  I fell asleep and slept two hours, which is pretty good for summit night.

I awoke with a mixture of nerves and excitement.  When we started hiking I was doing well.  I was keeping up with the group.  We were moving slowly.  A couple people in our group were sick and we had to stop occasionally.  I was impressed with myself that I wasn’t vomiting.  Again, on this mountain there is an entirely different scale of how you rate your daily successes. The people pushing through puke endlessly impressed me.  Having been altitude sick, I didn’t understand how they could keep moving, but up they went.  The guides were encouraging of everyone who was ill.  They reminded them this was normal and it was okay.

I was doing fine until I wasn’t.  It felt like a rapid deterioration.  My brain felt like it was shrinking.  I can’t quite explain what that feels like.  It’s not actually painful.  It doesn’t feel like a headache.  I felt like I weighed 500-pounds and that gravity was crushing me.  I could barely stand.  My entire back hurt, but my neck was in agony as if my head was massive—too much for the small muscles of my neck to support.  I’m pretty sure I was falling asleep while walking which made me tense, but not as nervous as the fact that I felt like I really couldn’t coordinate my trekking poles anymore.  And I lost some control over my left leg.  I would take a small step and drag my left leg along.  After a short break with some water, I tried to move again.  Ten steps later I required another break.  I think I attempted this three times, when I knew I was not going to make it up the mountain.  I remember feeling at the time that I never needed to feel bad about not summiting because I didn’t have a choice.  One of the guides who had been encouraging the pukers for days looked at me and said, “Do not force this.  The mountain will be here.”  I wondered if he thought I was weaker or if he was assessing different symptoms.  My next thought was I’m never coming back to this mountain.  Then I cried.

I headed back down the mountain with Paulie, my favorite guide from the group.  He took my trekking poles and probably supported half my body weight for the return trip.  I took regular breaks.  It was like doing the walk of shame.  Everyone hiking up stepped to the side for me to descend, and I couldn’t look up at anyone.  It was demoralizing.  I was frustrated, embarrassed, disappointed and yet truly felt acceptance for the need to turn around.  I was okay with what was happening, but I still cried on and off for the two hours it took me to get back to base camp.  All I wanted was my sleeping bag.  I’d made it over 17,000-feet. (Technically I got credit for 17,800-feet.)  Once back to base camp I slept for six hours until my fellow hikers were back from the summit.  They all made it to the top. 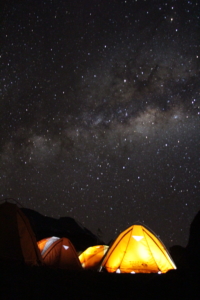 If you think the trip wasn’t great, know this was the night sky I got to look at every night. Photo care of ready_freddy_123 on instagram

I tell this story and I suspect the trip sounds awful.  It wasn’t.  I don’t regret any part of my journey.  I wish I made it to the top, but it’s also okay that I didn’t.  Looking back I love even the parts I hated.  Every day that the mountain moves further in my past, I love the trek more.   It’s why if I ever think of going again, I need to reread day three in my journal.

Once we’d descended all the way and left the gates of Mt. Kilimanjaro, the guides drove us to lunch.  A man was playing the guitar, they served green beans, and I was done hiking.  I was intensely, truly happy.  It was one of those moments in life where you are acutely aware of your happiness.  It’s one of the ways that Kili remains humbling.  I was reminded of how little I really need to be happy.  Basically green beans and a seat.  Those were the basics, but my happiness was derived by more than that.  I was happy I’d come.  I was happy I’d hiked.  I was happy to be with the people sitting next to me.  I was happy it was over.

Oh, in case you are still wondering why it was I peed in my sleeping bag on night one.  I didn’t wet the bed.  Well, not exactly. Technically, the bed was pretty wet.  It was so cold that I didn’t want to get out of the tent to go to the bathroom.  I didn’t want to get out of my sleeping bag to go to the bathroom.  Erroneously I assumed that I could pee into a container without getting out of my sleeping bag.  I couldn’t.  But it took me a while to realize that I was failing at that task.  Slow to catch on: another example of mountain good.

For tips on hiking Mt. Kili.