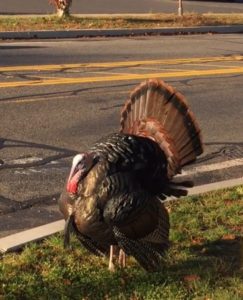 This spring I’ve had a weird obsession with the turkeys living in my backyard. About a year ago, I watched a male turkey strut his stuff in the field behind our house. With his chest puffed out, his tail feathers enshrining him, and shimmering iridescently in the sun, he paced back and forth while two female turkeys pretending not to notice. I watch this sad state of affairs far too long and then just felt bad for the guy. Clearly, these coy ladies who would glance his way and then turn away were not interested.

About six weeks later a female turkey trotted through my yard followed by a flock of chicks. His display had actually worked. Since that time we have had 11 turkeys living in our yard. They sleep about 40-feet up in the trees behind my neighbor’s house. They lay claim to the yard throughout the day perched on the fence between our yard and my other neighbor’s. In winter they leave tracks in the snow. And, earlier this year one female turkey chased me out of my own backyard—a display of both her character and mine that I was less than happy about. Once, I found them pecking at the windows of the studio. Like most of the animals in my yard, I’m torn. I love watching them, but they endlessly wreak havoc. My ego (and mortgage payments) wants to claim my yard for me.

This spring, the Tom of the turkeys was at it again, but this time he stayed closer to his female entourage. He’d display himself closely encircled by this harem. It really is quite spectacular and makes me understand why Benjamin Franklin vied for the turkey to be the national bird. He’d strut—that’s the actual term—surrounded by the women, who again played coy or downright disinterested. I watched this dance unfold everyday for week. My brother insisted I was a peeping tom. Was I? No, this was research. I got online to study the mating habits of turkeys. 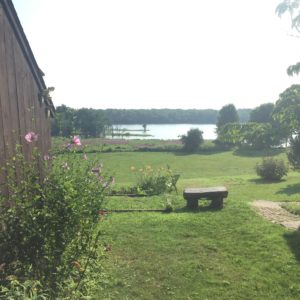 A male will look for an open field (check) and a place he has had success before (check). He wants the open area so the hens can see him with ease and he can watch for danger. When he returns to a place multiple times, he thinks he can get lucky there. That area become a “strut zone.” I’d like some signage for my backyard.

After a week of watching him parade himself with no takers, the Tom began approaching the ladies. Each of whom took her turn pecking at him. Then he pulled out the big guns. I saw one of the other turkeys start strutting his stuff. I returned to the Internet—the oracle of all human knowledge. Females can strut too to show dominance, but in this case it was another, smaller male. It turns out turkeys can have actual wingmen. Another male will help the dominate male get lucky. The non-dominant male can’t mate with any of the females. He’s just a really good friend.

I’m endlessly fascinated and don’t know what I will do in six weeks when we have ten more turkeys in the yard. Perhaps it’s time to start charging rent.

In classes Maggie tells her client’s stories to pass the time during plank.  Here are some:

Can you count on natural deodorant?