Be kind to yourself 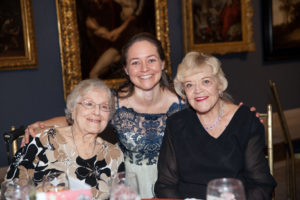 With My Grandmas. Blue-eyed Barbara to my left.

Earlier this year my step grandmother passed away.  Barbara had been my grandma since I was six, and she’d done the job well.  She loved my grandpa and my family. She would openly talk and tell stories of my biological grandma.  Barbara was independent, a lover of theater, music, and the UConn Huskies women’s basketball team.  She loved the beach, dancing, and socializing.  Her blonde hair was always done and her eyes were always a brilliant blue.

A couple of weeks before she died, I was visiting with her.  Though she had failed significantly, you could still have moments of conversation with her.  Her baby blues were so striking against the backdrop of her pail skin, so I mentioned how beautiful and blue her eyes were.  She responded, “I never liked my eyes.  I never even thought they were really blue.”  I was a little stunned.  That’s not a debate anyone else had.  Barbara had blue eyes. End of story.  It made me sad.  For eighty-five years she hadn’t enjoyed her own eyes as much as everyone else that looked at her.

I think that is too normal for so many of us.  We harp on something we don’t like about ourselves.  Something someone else wouldn’t even notice, or possibly even appreciates.

Over the weeks after Barbara’s death, I was pondering that conversation.  Since the final weeks of her life all blend together for me, it’s possible that was our last conversation, though that’s not how I remember the order of events.  For me our last conversation was the last time she came to the table at Tuesday night dinner with my family—a weekly event since I was four.  We went around sharing some of our best memories.  Barbara was certain of her favorite memory.  “The Day I met Bill Downie,” she declared emphatically.  My grandfather and Barbara had a wonderful relationship, and I have no doubt one of the things he fell for were those baby blues.

Months after we said good-bye to Barbara, I went to an event for the USO that provided honors to different soldiers.  A man was receiving an award after being burned in a fire.  He had spent six years in the hospital and remained deformed.  He’d lost his ears.  Though healed, his skin still looked like it might hurt, twisted and wrinkled in patterns only a burn will create.  He had a prerecorded speech where he mentioned that he was okay with how he looked because his parents raised him to believe he’s who he is on the inside.  I was partially baffled.  “Is this guy for real?” I wondered.  But there he was in front of me.  He’s human so I’m sure he has had his days.  No doubt he’s been in a funk and grieved for his former life.  But surviving what he survived seems to make him superhuman, and perhaps in that he truly does have the mindset he displayed.  Perhaps that’s how he survived.  He knew who he was on the inside.

I don’t think that a little vanity or being unhappy with a part of our body means that we don’t love ourselves on the inside.  But it does get in the way more than it should.

Like Barbara there are parts of my body that I don’t like.  I’m not the fondest of my legs or arms.  I have a bunion and I can’t stand the way it makes my foot look.  It’s not even that bad a bunion, but it bothers me.  And here’s the thing, while I dislike my legs, I’m pretty sure my best friend has always thought I have great legs.  Other people have never noticed my legs.  Others may have noticed and liked or not liked them.  It doesn’t really matter.

Anyone who really likes me, or you, or Barbara will like us whether they like our legs, blue eyes, wrinkles, or flabby triceps.  I do not want to be on my deathbed and tell someone I never liked my legs.  I want to tell them that I stopped hating a part of my body when I was thirty-six because it wasn’t worth it.  It doesn’t mean we can’t be motivated to make healthier choices for our body.  I’m not naïve.  Looks matter and it’s normal to care about how we look.  The question is how much time to we waste caring, particularly about parts of us that aren’t even bad. Negative self-talk simply isn’t helpful.  We need to see ourselves how we see our children or our best friends.  We think they are spectacular inside and out.  And that’s how they see us.

So it’s been one of my goals when I have the thought, “I hate my legs” to remind myself that those legs almost got me up Kilimanjaro, and they walk me down the historic streets of Old Wetherfield all the time.  They helped me run a marathon.  They are strong and really good at balance. When I list all those points, my legs seem pretty spectacular.  Or I try to remind myself of something I like about myself.  I actually like my blue eyes.  I think I’m a hard worker.  I think I’m good to people.  I’m trying to turn the table on negative thoughts about my body image.

It doesn’t work every time I have the thought, but I have to say I already think it is helping.  Because I dislike my legs a little less than I used to (and that’s not because they are getting better with age).

Let’s all try being a little gentler with ourselves and a little more loving.  Let’s see ourselves through the eyes of the person who loves us most in the world because through those eyes, we are pretty fantastic even through all our flaws.

I’ll always see Barbara’s eyes as blue.  And I’ll always remember she was a great grandma, and I was lucky to have her as a grandma, a friend, and a role model.