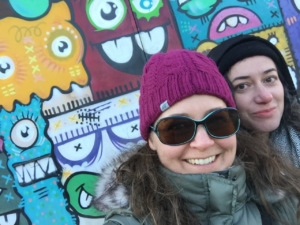 This is an oldie, but a goodie from over a decade ago.  My friends were turning twenty-five.  It may be laughable now, but we were struggling with aging and growing up.  I’m actually more comfortable with getting older now than I was then.  Since today is Julie’s, my best friend from elementary school, birthday, it seemed only fitting to pull this from the archive.  Happy Birthday, Julie.  And to every twenty-five-year-old: it’s going to be okay.

Upon turning twenty-five, in Peter Pan fashion, Julie planned a birthday party for herself filled with elementary school games like bombardment, kick ball, and spud.

On average, I’d guess the attendees at the party were between twenty-five and thirty-five.  The point is, we would be categorized a young, at least according to my grandma.

After five hours of playing games designed for children, I injured my hip (which would result in a visit to a physical therapist), Julie’s right ear became permanently attached to her right shoulder due to a kink in her neck (that required massage and physical therapy to undo), and Matt hurt his back (a previous injury that within a year would cause him to visit a PT too).  There were others limping and moaning in the group.  I am unaware of how everyone felt when they awoke the next morning, but I suspect others were also feeling muscles and joints they’d spent their entire lives trying to ignore.

Playing elementary school games did not have the desired effect.  We didn’t feel young.  The pain and stiffness made us feel really old.

Now, in fairness to all of us, we played these games for eight hours on and off with easily a solid five hours of play time.  An elementary school gym class usually lasts under an hour.  Perhaps even in our younger years we could have pulled, tweaked, and torn something if we’d had the stamina and attention span to play anything for an entire workday.

We also may have pushed through some of the pain in a joint effort to convince ourselves that we were still young—a choice that would, in fact, make us appear a bit infantile.

Knowing that a game called spud could knock you back for a week wasn’t a depiction of the glorious days of youth we were seeking.  But the day was a lot of fun with a lot of laughs.  A good laugh will always make your feel young.  Laughter can make you forget any worry.

We may have had more fun playing then we did when we were kids.  And all the injuries are now resolved or stemmed from earlier injuries from when we were really young, which shows that you can get hurt at any age.

I’d like to say that the lesson learned is that age is only a number and that our bodies are as svelte as they were in our youth, but I found the opposite was true.  Eight hours of playtime took a harder toll on our muscles and joints than it had a decade or two ago.

But that’s the truth. That’s life.  Workouts get harder, cells die, full time jobs and kids get in the way of fitness routines.  Yet all of that isn’t an excuse to stop moving.  Stopping will create immobility.  Yes, we ached, but were being active, making fitness fun.  I have no doubt that moving through all the aches and pains will keep us younger longer.  We’ve got to move.

Over ten years later, Julie and I still move together.  She’ll walk with me.  She’ll run and hike with me. For my birthday she swam in Jell-o with me.  She got me into kick boxing, and she once made me ride a divvy bike.