Plank Story: Raising Honeybees or the Yellow Rain Incident of 2017 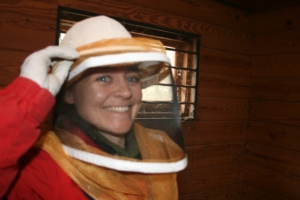 Each year I learn something new about how not to raise honeybees.  This year we have two, new, incredibly healthy hives.  They are going strong.  It was time to add what’s called a honey super (basically a box to collect honey that gets added to the top of the hive).  It’s like the bees getting an addition to their home to fill with honey that we will eventually steal.  But the day I had time to do it was over 90-degrees.

I didn’t want to put my bee suit on in 90-degrees.  Plus, the little buzzers are always more agitated on hot, sunny days.  So I thought I had this brilliant idea to wait until after dark to do the job.  It’s should be an easy and quick job.  This should be a lesson that I now know for certain.  Any time I think a job with the bees will be quick and easy, I should check myself.  It never is.

So I waited till dark, got my things together, stepped into my suit and zipped up (or so I thought).  The first hive was fine, but the second hive was irked.  It had been a long, hot day and the bees just started pouring out of the hive.  They really needed this extra space.  Here was the error of my ways.  At night all the bees are in the hive.  None are out collecting pollen or nectar.  So I had to contend with all 40,000 of them, and there were so many that simply placing the box on was killing some because they were getting squished.  The smell of dead bees signals the other bees to investigate and attack.  I was soon covered in bees, but so what, I had my suit on.

I closed up the hive and started walking away.  That’s usually all it takes.  If I get far enough away from the hive, the bees leave me and return home.  But as I was walking in the dark, I realized I couldn’t tell if the bees were walking on my mask inside my suit or outside my suit.  I began to tense and feel a little claustrophobic.  I was covered in bees, but possibly stuck in a suit with a handful of bees.  “Maggie, you’re being ridiculous,” I told myself.  “They can’t get in here.  Calm down.”  And then I got stung on my chin.  I knew they were in.

Matt was with me the whole time.  He was wearing regular clothes because he’s braver than I am about bee stings.  He suggested I simply step out of the suit and walk away.  But I recognized that while I was trapped in the suit with a couple, outside there were a bunch.  He’s fearless, so he was brushing them off me and got stung on the finger.  When they were off, I went inside and stepped out of my unprotective barrier.  It turns out I hadn’t zipped it up completely.  My second mistake of the evening.

This isn’t my first time nursing my bee sting wounds.  I popped a Benadryl to keep my face from swelling, iced my jaw and got into bed.  Benadryl puts me out.  Twenty minutes later Matt woke me up.  He’d broken out in hives and welts all over from his sting.  He needed to go to the ER.  In my sleepy stupor, I explained, “I just took a Benadryl.  I can’t drive you. But do you want me to come?”  He assured me I didn’t need to come.  Great!  My head hit the pillow.  Luckily he got to the hospital, they gave him prednisone and everything was fine, but it will still go down as one of my worst significant other moments of all time.  “Oh, you’re dying?  Well, I’m really tired so I’m going to go to bed now.”

Before I’d gotten into bed, before Matt needed emergency personnel, I’d looked in the mirror and seen something in my hair.  It was bee poop.  At least I thought it was.  I’ve never actually seen and touched bee poop before, but something, perhaps the smell, told me that’s what I was pulling out of my hair.  Later, Google would confirm that it was in fact bee poop.  So I guess the bees were technically more afraid than I was because I didn’t poop my pants.  Or it’s one of their new attack methods that I haven’t read about yet.

The two major lessons from the evening were: always zip your suit and don’t work on the bees at night.  But perhaps more interesting was that I also discovered that in 1981 there was an international bee poop incident known as the yellow rain incident of 1981.  The US Secretary of State accused the Soviet Union of providing a toxic mold to Laos and Vietnam to use in warfare.  While some refugees claim that a sticky, yellow substance fell from the sky, the United Nations investigations were inconclusive.  Some scientists looked into the matter and determined that it might have been massive swarms of bees pooping.  We may never know.  But it is possible that bee poop caused an international incident.  And while toxic mold, warfare and refugees are not a laughing matter, mass amounts of bee poop is.