How Egypt Opened the World for Travel

A friend asked me recently how I decide where to go on vacation?  From the beginning, I’d always enjoyed social studies and history class in school, but my freshmen year of high school when I took Western Civilizations with Dr. Dan Kelly, I fell in love with history.  I knew then that I wanted to teach history at the college level and see the pyramids.  I’m a graduate school dropout so teaching history never came to fruition.  I left the PhD program in Early Modern European History with a focus in gender and sexuality almost as soon as I started.  But less than a year after leaving graduate school, I was in Egypt  at the pyramids with Matt.   Our time in Egypt opened the world up. 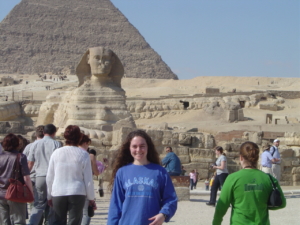 It was two years after September 11th and our families were pretty worried about our safety.  I was concerned.  Egypt seemed like a scary, intimidating place from back home, but once there it wasn’t.  I was more afraid driving on the skinny, one lane, cliff-edge roads of the Dingle peninsula in Ireland than I was in Egypt.  That didn’t mean that I loved seeing men in uniform standing on almost every building with 50-caliber, belt fed, mounted machine guns.  But it made me more grateful for the United States where that isn’t the norm.  The scariest part of Egypt was probably trying to cross the street in Cairo, which was pretty much a live game of Frogger.  Crossing the street involved taking your life in your own hands.  And haggling.  I hated haggling.  Still, when we travel I rather pay more than haggle.

The Egyptian people we interacted with were thrilled to have American tourists.  They’d gone two years with incredibly low levels of tourism.  They would ask where we were from.  When we said the U.S. we often got the same response: “Welcome to Alaska.”  Amused, we tried different countries.  If we said we were from Canada, the retort was, “Canada, Canada Dry.”  We tested out other English-speaking counties but as that trip turns into a distant memory, I can’t remember what they would say back.

As American tourists we were always escorted around the country.  If we took a bus there was a police vehicle escort in front and back of our bus.  When walking as a group, there was a plain-clothed, armed guard.  If the crowds crept in on us, he would come near and the crowds would part like the seas for Moses.  It was peculiar.  And I couldn’t decide if it made me feel safe or like a target.

The Egyptians struck me as easy to laugh with each other and with us.  The pyramids were a dream come true, although the back drop is basically a strip mall with McDonalds and other recognizable western shops.  I would have liked to climb to the top, but they don’t let you do that anymore. It would be a challenge.  Each stone that built the pyramids was higher than my shoulders and far wider than my wingspan.  You can’t help but marvel at the engineering undertaking and the struggle that went into building these tombs. 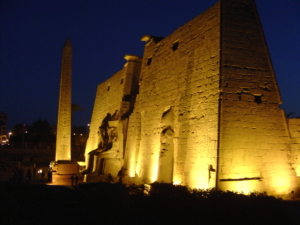 We rode camels.  They have a lumbering gait that makes you sway back and forth on the top held in place only by the humps.  Our guide told us they would try to get more money out of us when it was time to get off the camel.  We weren’t supposed to give it.  At the time, I was so nervous on the camel I gave them anything they wanted when it came my turn to get down.

Luxor and the Valley of the Kings impressed me even more than the pyramids.  Sunrise cruising down the Nile reminded me that the same giant star rises and sets on all of us, lighting the day so that we can see the beauty of the whole world. We watched a whirling dervish twirl into a blur of color.  We ate the deplorable food.  The air was so filthy if I blew my nose, my snot came out black.  Those last two may sound bad, but it wasn’t.  Because now I knew it.  I could say I’d tried the food and didn’t like.  I could say the people laugh with a sense of ease.  Every moment was an adventure. 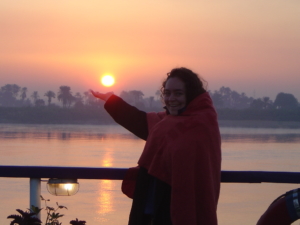 Going to Egypt and feeling secure opened up an entire world of travel for us.  Egypt provided a confidence that vast parts of the world are not as unsafe as we presume.  For the most part, people are people anywhere you go.  We might have different views and different lifestyles, but most people aren’t out to cause others harm.  That realization created a freedom to go anywhere.  That’s not to say there aren’t places that, at given times, are unsafe for travel, but Egypt seemed to put the whole Earth into the realm of possibilities.   So now if I see a picture of something beautiful, I want to go see it in person.  I’ll plan a trip around one image or a natural wonder.  My experience in Egypt made the globe a little limitless.  And ultimately, I have the Egyptian people to thank for that.