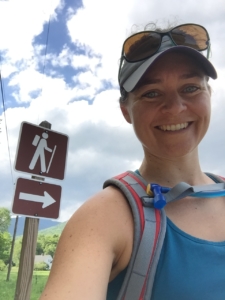 Heading to the trail-head alone.

I can’t explain why but I needed to go hiking alone. I felt compelled to hike in the White Mountains all by myself.  For some people this may be no big deal.  When I’m hiking, I see lone hikers all the time.  And now I wonder if their moms are as worried about them as mine was about me.  Because mine was pretty worried.  If cell service allowed I promised to text her practically hourly.  Luckily for her sanity there was service the entire hike.  It made me feel safer too.

Part of my reason for hiking the White Mountains alone was practical.  I didn’t feel like planning.  I was going to be half way there after working in Boston, and I didn’t want to have to drive back to Connecticut to meet friends and drive back.  Matt was traveling for work.  But for all those excuses there was something else drawing me.

The White Mountains is one of my favorite places to spend time. I wanted it to myself for a moment.  I’m comfortable there.  The hikes are challenging and you can get above the tree line so quickly.  After what feels like endless stairs, you are rewarded with a spectacular view that reminds you how outstanding the world is.  You feel tiny and remarkable at the same time.  I’ve seen the views hundreds of times and my memory still can’t capture the picture.  There is nothing like being there.  And I always hate when it’s time to come back down.  Why would anyone ever want to leave?

I wanted the opportunity to bale for any reason, particularly rain, so I drove up  at night with no hotel or camping reservations.  I assumed I’d find a place to stay, but as I entered the town I would be hiking in the next day every motel had the same glowing neon sign: No Vacancy.  Luckily I was able to get the last site at a campground.  “Tent or camper?” they asked me.  “Neither.  I’ll be sleeping in my car tonight.” 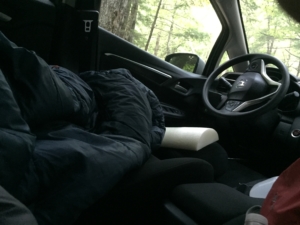 The great thing about my Honda Fit is that the seats can fold so many ways.  And the driver’s seat can fold flat.  It’s called “Refresh Mode.”  I’d never used it and had to google how to get the seat into refresh mode in the dark of the campsite.   I thought naively, it wouldn’t be so bad for sleeping.  It was so bad.  The seat isn’t actually flat because the shape of the seat isn’t flat to begin with.  So I tried to fill the gaps with the half foam rollers I drag to classes that clients put their feet on.  I’d never been so happy to have a clown car of inflated balls and half foam rollers, though neither really seemed to help much.  After four hours of restless sleep I was up and ready to hike over twelve miles to cover two peaks, Passaconaway and Whiteface.

Once I got hiking I didn’t see another person for three hours.  I found myself altering between cursing myself for this silly idea of hiking alone and then being very pleased to be alone with my own thoughts and pace.  The hike wasn’t very hard which was disappointed.  I presumed I was about to pay for the ease I’d been experiencing so far.   I was. Two hours in I’d barely ascended.  It all came at the end, what felt like 2,000 feet in the last half mile.  Which led me to alternate between cursing and singing, “What goes up, must come down.”  Just that one line over and over.  I was alone though, so it was okay.

The biggest fear with hiking alone should be injury.  And while I was worried about that I figured if I got hurt, I’d just have to wait for someone to hike by me for help.  What I was more afraid of was irrational—the idea that some mountain man was waiting to assault me in the woods.  Not that this can’t happen, but it’s pretty unlikely.  Still, sometimes I’d hear a leaf fall or my water slosh in my pack and be certain someone was about to murder me.  I think that is in part why I needed to hike alone. I’ve come to realize lately that there are many small things that as a woman I just don’t do under the guise that it’s not safe for a woman to do them alone.  Sometimes I catch myself limiting myself for the fear of what could happen.   Hiking alone or running on a community path alone does not mean that if something ever happens to me I was asking for it or being foolish.  Hiking alone felt empowering by refusing to be afraid.

After reaching the first peak I came across more hikers.  They gave me advice along the way, more than I normally get from other hikers and I couldn’t help but wonder if it was because I was alone.  Is there some unconscious hiker’s code that you prep lone hikers more? 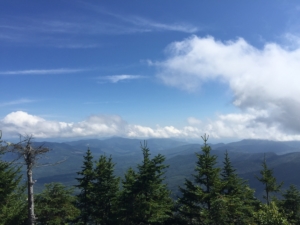 Mount Passaconaway was a bust.  Mount Whiteface was spectacular, a favorite.  The hike was fun and challenging.  The outlook made me feel like a king.  For about ten minutes I had a giant outcropping and the entire view to myself.  I really wanted to share it with someone.  I’ll have to take someone back. 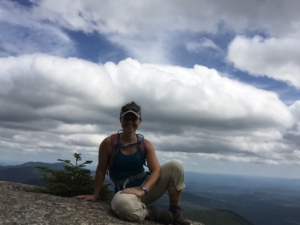 Another great hike in the White Mountains!

I proved to myself what I needed to prove; whatever it was I’m still not certain.  Part of me assumed that with seven hours alone with my thoughts I’d be able to unravel some major world problem—solve world hunger or figure out colony collapse disorder in honeybee populations.  As I neared the end of the trail I realized that was growing unlikely.

I’d go alone again.  Maybe I’m drawn by the beauty.  Maybe it’s my apparent ego that makes me presume if I just had seven hours to myself I’d solve the worlds woes.  But generally, I’m an extrovert.  I need people to be happy.   I like my mountain better with friends.  As I’ve gotten older, I require time to restore.  I think that may be why I needed to hike alone.  Form the top of every peak and outlook in the White Mountains, the world looks pristine, untouched.  But I can restore from the fresh air and the mountain views surrounded by friends.  And I generally prefer the shared memory. 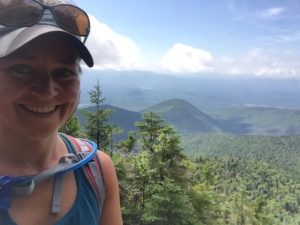 Alone or with friends this view is wonderful.