Going to Comic-Con wasn’t exactly outside my comfort zone, but it wasn’t on my list of things to do, and certainly wasn’t something I’d normally be interested in attending.  I’ll plan a hike, a fire walk, a giant slip and slide and build an igloo, but I wouldn’t suggest a day at a comic convention.  The only reason I wanted to go was to spend time with my brother and Matt and to watch them enjoy it.  That was the only reason until I discovered John Cusack was going to be there.  I’m still not sure why Cusack was at Comic-Con, but I’ve been a fan before I even knew who he was as a child watching Natty Gann. 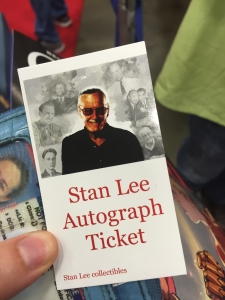 The awkward, though understandable, thing about Comic-Con is that you basically have to pay for any interactions with “the talent.”  If you want an autograph, you pay.  If you want a photo-op, you pay.  If you are someone who collects signatures that makes sense to me.  If, like my brother and Matt, you know Stan Lee is 93 and you probably won’t get another chance in life to interact with him, I totally get paying for a 20-second meeting.  But overall, it feels forced and weird.  I wasn’t willing to pay for a Cusack autograph, but I did get to shake his hand, and he was very friendly.  I prefer my impromptu moments when I’ve made a fool of myself in front of famous people.  The running list currently includes Jason Segel, Joe Pantoliano and Susan Sarandon—all experiences that they have definitely forgotten about, but still make me laugh.

Walking around Comic-Con, which in Dallas is now technically Fan Expo, many attendees are dressed in sometimes elaborate, sometimes revealing, sometimes silly costumes.  The time and effort people put into their costumes is impressive.  And the costumes are worth going for, even though I didn’t know who half of the people were depicting.  Walking around the expo looking at the art was a treat.  It’s not my style, but many of the artists are incredible.  But better than the costumes or the artwork were the presenters.  Most of whom I’d never heard of. 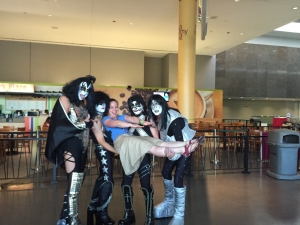 A taste of some of the cosplay (costumes) at Comic-con.

I’m embarrassed to say that going into Comic-Con I didn’t know who Stan Lee was.  We should all probably know Stan Lee.  He created Spiderman, the Hulk, the Fantastic Four, Iron Man (swoon), among other super heroes.  I’ve never been a huge comic fan.  I never read them as a kid.  Comic book characters have grown on me because of recent movies, although I’ve still never seen one Batman film—a fact my brother should correct next time I see him.  Matt had to drag me to Deadpool and I loved it.  I thought the writers and Ryan Reynolds deserved an Oscar.  Woody Harrelson’s Defendor (a movie worth seeing) is one of my favorite super heroes.  The take away: I don’t know my comic or super hero stuff.

So I kind of got eased in to the Comic-Con experience when John Cusack was the first presenter in an interview format.  The interviewer was terrible, which was kind of awkward, but Cusack seemed down to earth and kind.  I wouldn’t have gone to Comic-Con just because Cusack was there, but at the start of the day, he was the only part that even remotely interested me.  And this is why it’s always wise to step outside of our normal activities and comfort zone.  Because listening to Cusack was enjoyable and took me back to my childhood, but the next two presenters were incredible and inspirational, and I’d never have heard of either one if I didn’t come to Comic-Con.

The second presenter we saw was Todd MacFarlane.  There should be a mandatory law that every high school has MacFarlane come speak to the students.  He was funny, a great story teller, captivating, inspirational, interesting, and I became an immediate fan.   If you have never heard of the creator of Spawn you might know him because he probably designed your favorite baseball action figure.  His story of possibility and hard work made me reflective.  He didn’t become a famous comic out of sheer luck (although he emphasized some luck and being ready at the right time).  The man works 12-hour days.  He recommended that people who wanted to be artists start small.  Don’t start with a full body, start with a hand.  Draw a hand for hours every day for a week and after seven days he said you’d be a reasonable hand drawer.  You’d certainly be better than when you started. That’s a lesson you can take into any field.  Break the subject matter into smaller pieces and conquer a part at a time.   I wish I had his talk on tape to listen to whenever I need motivation.

When he was just starting out he said he wrote every editor in the business, not just one editor at each location.  Every editor on staff.  He received many rejection letters, but finally broke into Marvel.  I think that job lasted about two months and while working at Marvel he was still getting letters from other Marvel editors saying he was rejected: not good enough.  He saved all the letters, assuming that if nothing else he had their signatures.  When he lost that job, he wrote all the editors that had responded with any sense of hope and this time listed himself as a professional comic.  He’d worked at Marvel, after all.  Perspective.   He didn’t see the rejection letters as rejections.  They were responses and contacts he now had.

The next day, MacFarlane interviewed a very quick-minded, slightly deaf, 93-year-old Stan Lee.  He made me wish I could return to my childhood and fall in love with comics from the beginning.   He too was a story of inspiration.  He’d been drawing comics and doing well enough that his editor told him he could create his own superhero.  So he went home and thought about it.  A bug on the wall inspired him.  Wouldn’t it be cool to stick to things, he wondered.  His super hero would be bug man or beetle man…no, Spiderman—a teenager with a troubled past.  He pitched the idea to his editor who suggested that perhaps Lee actually didn’t understand what a superhero was.   Spiderman was dead on arrival, but Lee couldn’t get the character out of his head.  He added this new character briefly into a comic on its last edition (I may not have the comic lingo quite right here).  According to Lee that last comic, which normally doesn’t do well was a huge success.  His editor came to him and said, “Remember that Spiderman character you created that we both thought was a really good idea?  We are going to make a comic about him.”

Both MacFarlane and Lee seemed insistent, unwilling to back down on ideas they believed to be good.  They seemed to trust in their ability and believe in themselves.  But they worked hard for it.  What seemed like a failure in a particular moment, rarely turned out to be negative.

I was enthralled watching both men talk.