Before Matt and I left for Portugal people recommended all sorts of food and experiences we should try.  One recommendation was Vinho Verde (an immature, white wine) and another was Fado (a somewhat melancholy, traditional music).  We wound up trying them on the same night. 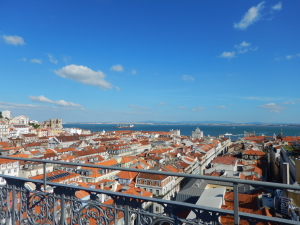 A view of Lisbon from above. Somewhere down there we were racing through the streets to get to Fado.

We’d gone out to dinner and were stuffed, but ran through the streets and staircases of Lisbon to get to the Fado bar.  The music was supposed to start promptly at nine.  People and restaurants were spilling out into the cobblestones streets, so we zigzagged down the small alleyways beneath colorful streamers hanging above and amongst the excitement of everyone watching soccer in the streets.

We arrived at the Fado bar just in time.  They had one table left. “We’ll take it,” we said.  “You’ll be eating dinner?” they asked.  Oh, we were so full.  We didn’t want dinner.  We just wanted to listen to the music, but there was a 30-Euro requirement per person.  We took a seat resigned to eat more and looked at the menu for the least amount of food we could get, the meal we’d just finished still rumbling in our stomachs.  What could we pick that would be the lightest fare and cheapest selection?  We opted for mussels, salad and a bottle of the vihno verde—still two euros short.  The waitress was finding us more and more irksome—two cheap Americans. 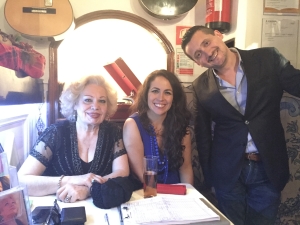 Some of the Fado performers in Portugal.

Fado wasn’t what I expected.  I wouldn’t have described it as sad, in fact, at times everyone who spoke Portuguese was laughing.  When the music starts, the lights dim, someone rings a bell, they request quiet, and they play a twelve-string guitar while a man or woman sings.  They perform about four songs, the lights come up and people continue eating and chatting.  This repeats itself about every twenty minutes.

Just before the first set, I had a sip of the vihno verde and told Matt there was no way I could do it.  I couldn’t even drink my glass.  It was so bad.  It tasted like a headache tomorrow: sweet and strong.  It was vihno verde that would make me melancholy, not fado.  I don’t like white wine, so I may not be the best judge, but Matt wasn’t a fan either.  Still, he felt obligated to finish the bottle and my glass.  By the middle of the show, Matt was feeling pretty good.  The mussels were tasting extra good.  In fairness, those mussels were fantastic.  The shellfish throughout Portugal was wonderful.  A bottle of wine was not required to improve them, but Matt was well into a bottle.  He called our waitress over, lifted his arms out to the side, elbows bent at shoulder height like a strong man and announced, “More mussels!  More mussels!”  The waitress laughed and quickly went from resenting us to catering to us.

I couldn’t help but wish everyone got that excited about muscles.  Next time we’re in class, maybe halfway through, you’ll excitedly shoot, “More muscles!  More muscles.”  A girl can dream, right?