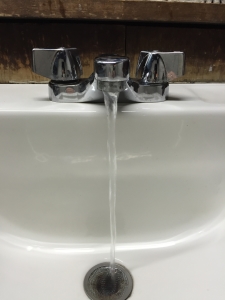 Should we drink our tap water?

I’ve hesitated to write this blog for a while because I always hate the idea of fear mongering, but I’ve decided that I’m really just providing information.  You can research more.  You could not read this. You may already know this. Either way you can ultimately decide what is best for you and your family.

I’ve limited my personal consumption of fluoridated water for years.  That is nearly impossible if you order water when you go to a restaurant, and it requires carrying water bottles around with you, but I think it’s worth it.  My concern began years ago because I wasn’t aware of any thorough testing on whether or not fluoride was bad for human conception, excluding the potential benefits to your teeth.  Did you know too much fluoride is actually bad for your teeth?

But now there is more and more research to point out that we should all be concerned and cautious.  While the CDC lauds the benefit of fluoride in drinking water for good dental health, new research is pointing to the fact that we may want to reconsider our use of fluoride.  A research team from Harvard School of Public Health (HSPH) and China Medical University in Shenyang  found a link between fluoride in drinking water and lowered IQ.  The study looked at 14-year-olds in China, but believe the damage from fluoride occurs at a younger age.

In February 2014, the Lancet, a reputable science journal, released an article claiming “Industrial chemicals that injure the developing brain are among the known causes for the rise in prevalence” of  “neurodevelopmental disabilities, including autism, attention-deficit Hyperactivity disorder, dyslexia, and other cognitive impairments.”  The industrial chemicals include lead, methylmercury, arsenic, manganese, and fluoride among others.  We care (as we should) about the damage to children in Flint Michigan who have been drinking lead, but we willingly allow the government to add fluoride to our drinking water without proper testing on what is does to human health and neurology.  It may be fantastic to our teeth, but at what cost?

In 2015 a British study found a correlation between high levels of fluoride in drinking water and increase instances of hypothyroidism.  Correlation is not causation—an argument against the study.  While the CDC seems to think there is no cause for concern, the NCBI, a segment of the US National Library of Medicine has a paper from July 2011 which states: “Fluoride was used as a drug to treat hyperthyroidism because it reduces thyroid activity quite effectively. This is due to the ability of fluoride to mimic the action of thyrotropin (TSH). ..When there is excess of fluoride in the body it can interfere with the function of the thyroid gland. Thus, fluoride has been linked to thyroid problems.”  In the nineteen-fifties we treated hyperthyroid (overactive thyroid) with fluoride.    NOTE: the CDC makes all their claims without any randomized trails on fluoride consumption.

Supposedly, the numbers matter.  That is how the CDC justifies fluoride use.  I’m sure the numbers do matter.  The more fluoride, the worse, but we really don’t know how much is okay.  The Department of Human Health and Services (HHS) did lower the recommended amount in drinking water in 2015 from .7-1.2 milligrams to .7miligrams—a number they hadn’t updated since 1962.   The reduction came when the HHS claimed people were getting fluorosis because they now get fluoride so many places now they don’t need as much in the drinking water.

For those living in the greater Hartford area of Connecticut, if you visit MDC’s 2012 water quality report they reveal the EPA allows them to have up to 4 milligrams of fluoride in the water, but they try to stick within the range of .72-1.81 (higher than the old recommended amount, and an amount I hope has gone down since the new recommendations from the HHS last year).

Because, really, that is the problem.  The government can put fluoride in drinking water, but they can’t regulate consumption of water.  They have no idea how much different individuals are consuming.  Drink more water; ingest more fluoride.  No matter what your age.  Adults filter fluoride better than kids, which means fluoride remains inside children longer.

There is so much more reading if you are interested.  I filled this blog with links.  Whatever your viewpoint on this topic you get no judgement for me.  I’m terrified of fluoride and I still drink it in tap water sometimes.  I still use fluoridated toothpaste.  I just thinking being an educated consumer let’s you make a choice.  Having fluoride forced into my local drinking source diminishes my choice, especially if I’m unaware of potential risk.  And let’s presume for a moment all the research above is wrong and fluoride is fine, until we know, we are we drinking it?

Here are some options if you’d like to consume less fluoride:

Have water delivered or drink bottled water.  But check to make sure it’s fluoride-free.

Invest in a filter, but buyer beware—only some filters filter fluoride.

Write your congressman, your local water source and voice your concerns.