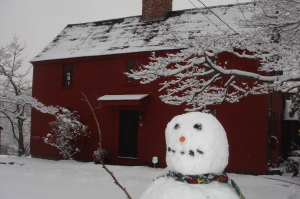 While it’s been a mild winter so far, we did have one frigid day a couple of weeks ago.  I was reminded of years ago, probably a decade ago, when Matt and I lived in a condo.  I woke up one morning to find no water coming out of the faucet.  Matt was asleep, so I decided to mention it later.  Then I forgot.  We had to run out and when we returned home and got out of the car you could hear what sounded like a waterfall inside our house.  When we opened the front door a pipe had burst and was spraying freezing water, already inches deep.

We tried to close the water shut off valve but it was painted opened, underwater, and we were freezing.  As the water sprayed at us, Matt yelled, “Bail!”  I ran from the room to find a bucket.  He thought I had bailed, leaving him there to handle the situation alone.  I returned with a bucket, caught the spraying water and immediately tossed it out the front door where it hit the walkway turning immediately to ice.

The water company claimed they couldn’t help us because the ground was frozen, so we worked at it until we got the valve closed.  And then Matt made a rule: If anything strange ever happens in the house I should wake him up no matter what time of day.

Flash forward to that bitter, cold day a few weeks ago.  We now live in an historic house.  I got up, went to hop in the shower and couldn’t even turn the faucet.  So I woke Matt up right away.  Sure enough our pipes were frozen.  And the real kicker is it happened in a part of the house that was built in 1980.  Most of our house was built in 1666. The old portion never leaks, the pipes don’t freeze and with the woodstove going it actually gets quite toasty even though there is no insulation.  The new part of the house has been a disaster since the day we moved in.  It leaks; it’s freezing; all sorts of critters, most recently a raccoon family, get underneath it.  And this is where we sleep.  This is where we try to sleep.

I suggested we get a hair dryer.  The next thing I know Matt is warming the frozen fixtures with a heat gun I didn’t even know we had.  A heat gun gets up to about 1,000-degrees which is fine for the metal fixtures, but not the plastic parts inside them.  So we literally melted out fixtures.  And the part of the faucet that says “H” or “C” isn’t metal either.  That now looks a little like the clocks in Dali’s Persistence of Memory–a bit droopy and warped.   We cranked the heat up to eighty.  Put an electric heater on either side of the wall with frozen pipes and turned the oven on.  Nine hours later the pipes thawed, and it appears we have no additional damage.  Phew.  But lesson learned.  I talked to a client who is also a plumber.  Apparently, we did everything right except for the heat gun.  Next time a hairdryer will do just fine.