Running Goals: Are They Worth the Pain? 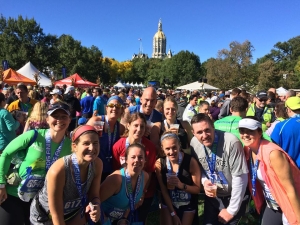 The folks who motivate me to keep running.

Last week I went for a run with my iphone, a playlist and some earbuds. That probably doesn’t sound event worthy to most people, except that the last time I had music when running it came from a Walkman.

In college I used to run six miles a day and eight to twelve (usually eight) on the weekends. I preferred running alone and only occasionally ran with others.  Running companions were so rare that I remember every time I had a running buddy.  Originally, not a lover of running, taking on long distances happened by accident.  One day I went for a run with friends, fell behind (I’ve always been slow) and got lost.  I figured if I kept running it would all be over sooner.  In the end, I’d run six miles.  And once I realized that I could, I wanted to do it all the time.

Now, I rarely enjoy running alone. It’s too bad because I think I got a lot of ideas and worked out a number of problems in my head jogging by myself.  But I wouldn’t run the kind of mileage I do now without friends and a support network that motivates me and helps me look forward to my next run.  I want to share stories, talk about a good movie, and laugh when running—all more awkward on your own.  It’s unlikely I’d still be a runner if I hadn’t met my running mates, the Old Wethersfield Boot Campers.  I’m the youngest in the group by about ten years, and, also the slowest, which I hope is an ego boost for everyone else.

I have this somewhat arbitrary goal of running a half marathon in under two hours. The closest I’ve ever come (three separate times) was 2:06. Each time, the entire 13.1 miles felt like a struggle and by the end my whole body hated me and resisted with nausea, crapping and general muscle pain. My boyfriend would ask why I pay to punish myself.  None of it seemed like fun to him.  More recently, I’ve run half marathons around 2:10 or 2:11.  The race takes effort, but is doable.  My body feels fine at the end.  It amazes me the difference four minutes can make in how I feel.  Last weekend when I ran the Hartford Half Marathon I finished in 2:18, and, perhaps not surprisingly, I felt the best I’ve ever felt while running a long race.  The weather was perfect.  My legs felt great.  The hills (and Hartford is hilly) felt easily conquerable.  Those cheering on the sidelines seemed extra invigorating.  It made me wonder why I have this under two-hour goal.  If for the matter of ten to eighteen minutes I could completely enjoy the run, why would I desire to push myself through pain.  It affects the whole running season.  You have to run faster and do sprint work.  But I do.  So one year I just have to work to reach that goal.  Once complete I can just enjoy the rest of my runs at whatever pace my legs will take me.

If you’re not a runner taking six minutes off your time may not seem like a big deal. If you are a runner, you know it’s a lot.  You only have 13 miles to take if off.  That’s 30 seconds a mile.  Maybe next year.  Maybe not.  It depends how much fun I want to have running, and whether I can listen to my own advice about movement.