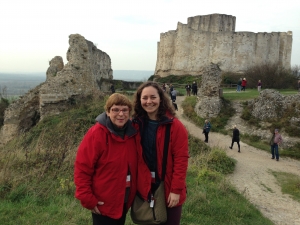 Ann and I went to France in November to celebrate her 75th birthday.

I have a good family friend, she’s more of an Aunt, who always invites me to attend the programs her branch of the AAUW (American Association of University Women) put on.  The food is always great thanks to the Norwich Inn and Spa. They accommodate my gluten-free needs.  And the presenter, lecturer or performer they have at these gatherings is always superb.

The event is always outstanding.  So it’s odd that last week, I presumed the program was going to be lame.  I don’t know why, because it was a one woman musical theater performance about female historical figures.  I love theater. I was a history major.  This should have been right up my alley, but I went to this one for the sole purpose of spending time with my Grandma and my Aunt Ann.  I just thought the performance sounded like it was for kids.

I shouldn’t have questioned it because I’m in part raising honey bees because of a Connecticut based author and beekeeper they brought in years ago.  I should just know the banquet will be great from start to finish.  And though I anticipated a flop this time, I was pleasantly surprised.  Patty Carver wrote, starred in and researched This Old Hat: Leading Ladies.

Her performance was wonderful.  The writing was fantastic and inspirational, especially for women.  I thought young women should all see this show.  The stories of the women she depicted were incredible.  She enacted the stories of Dolly Madison, who we can thank for saving the Constitution from burning; Elizabeth Blackwell, the first female American doctor; Nellie Bly, the first undercover reporter who helped reform how the mentally ill were treated; and Belva Lockwood, the first woman to run for President.  Belva was one of my favorites because it was so relevant and she ran for President in 1884—before we could vote.

What was especially great about the message from Belva’s story was that when you try something, you learn something and in that you cannot fail.  Many women, didn’t support her running for President.  She did it anyway and got some 4,000 votes.  Her competitors got more like 5-million votes.  But she got 4,000 men to consider electing a woman before women were allowed to vote.  Did she fail or did she start a process, albeit a long process?

It was a great night, hearing about impressive women, surrounded by a wonderful group of ladies.  I really enjoy my nights with the AAUW.  And next time, I won’t have any doubts.  The show will be great!