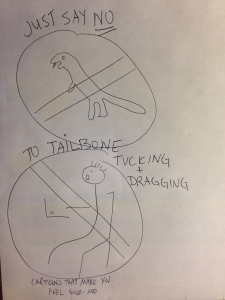 Just Say NO to Tailbone Tucking!

But we shouldn’t drag our tails either.  Now, we don’t have tails, but we do tend to tuck our tailbone under, especially when we sit at a desk all day or drive in a car.  Even when we stand many of us push our pelvis forward in space, ultimately tucking our tailbone—an unhealthy position for our low back, hip flexors and pelvic floor.  So next time you’re sitting down, or if you are sitting now, try to untuck your tail bone and sit up on your sit bones (the aptly named boney protrusions in your butt).  It will feel like you are sticking your butt out.  Keep your abs gently engaged.

And if you have a minute, enjoy this video showing another reason researchers have ruled out dino-tail drag.  It’s worth watching for the chicken-plunger scene.