I ran the Manchester Road Race for the first time.  I’d planned to dress up as a turkey, which seemed fitting, but when I got there I soon realized that what my costume provided in warmth, it lacked in creativity.  My favorite costume was a group of guys who dressed up as different Robin Williams characters—Aladdin, Mork, Mrs. Doubtfire and Patch Adams. There were considerably better turkeys too. 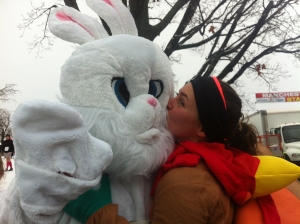 The Easter Bunny & a Turkey run the Manchester Road Race

Matt, my beau, went as the Easter Bunny.  The crowds loved him.  People stopped him for a photo-op, a high-five and even a shot.  If I ever lost him, it wasn’t long before I’d hear from the crowd a roar of excited children and adults explode with, “The EASTER BUNNY!”  I only had one crowd member react to my tailored turkey.  I was right behind Matt when a little girl excitedly let out the reaction of the day, “The Easter Bunny, “ she proclaimed eyes wide and full or wonder, “And a turkey.”  It wasn’t said with disgust as much as utter disappointment after seeing the Easter Bunny on Thanksgiving.    In fairness, the head of my costume has fallen off and was dangling around my neck, like a slain turkey ready for the table.

Road races are so much fun because you get the roads closed to run, race, be silly, or complete a goal. And the spectators have always been one of the best parts for me.  Often people who think runners are crazy come out to cheer for friends, family and strangers.

Hands down the best part of this particular race was the opening.  Before we started running, a woman was singing the National Anthem over an intercom system that went dead.  When the sound cut out, barely a syllable was missed and the entire crowd of over 11,000 people started singing along.

In a season where you are meant to stop and reflect on what you are thankful for, I was thankful for a community that would put on a great event and for the ability to be mobile.  I love that I can keep moving.