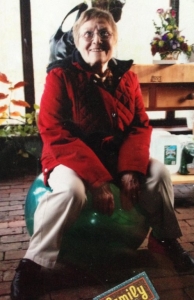 My Grandma at 88 on a Stability Ball.

There are lots of reasons I move.  It makes me feel better physically, mentally and emotionally, and there are a lot of physical activities I think are fun that I want the freedom to do.  I’m also really antsy, and I use movement to burn off extra, jittery energy.

But if I’m going to overanalyze it and step back into the reaches of my brain for why I move and believe it’s so important to creating a better life, I have to, at least in part, attribute it to my Grandparents.  My Grandpa Downie was antsy too.  I never saw him sit without a foot tapping, and he was really active until he hit about 80.   But it was more my Grandma.  When I was born she’d been wheelchair bound and bedridden for thirty years.

In her 30’s she was diagnosed with rheumatoid arthritis.  My dad said one day she was walking and the next she never got out of bed.   The disease crept up on her, but the change from mobility to immobility was sudden.  She was a great woman with an incredible attitude, and she never seemed to let it get her down, though I’m sure she had her moments.  My Grandpa worked hard to ensure her quality of life did not diminish, taking her to parties with their friends so she could be social.  He loved her so much; he never seemed to mind doing anything for her, though I’m sure he too had moments of frustration.

Today, she would have had a healthier life.  They have much better medication for rheumatoid arthritis.  She died when I was four from complications of a medication she was taking.  My grandfather never said anything bad about my grandma to me, but multiple timeshe told me that what bothered him most was knowing that the doctor had told her if she moved as much as possible she may not need a wheelchair and could possibly walk with braces. She needed to exercise, and she chose not to because it hurt too much.  My grandpa wished she would have worked through some of that pain so they could have had a higher quality of life together.

I don’t have arthritis, and I can’t imagine the pain she was in, but I know movement makes everything (including pain) improve.  Without moving the pain only got worse quicker, in my grandma’s case crippling her hands into crumpled up balls.  My grandfather’s words stuck with me.  I believe if she had moved she could have altered her own fate.  And since rheumatoid arthritis is genetic, I worried throughout my childhood that I might get it and become bedridden.  Today I wouldn’t wind up in bed, but I still worry since many auto-immune diseases strike in your 30’s.   I move as a precaution—to safeguard my future.  I want my body to be mobile as long as possible.  I want the active life my grandparents dreamed about in the letters they shared during WWII.

By comparison my maternal grandma contracted polio when she was nine.  She was strapped down to a wooden board in a hospital bed where they regularly wheeled out those who died from polio in front of her.  She was completely immobilized for six months.  I can’t even imagine.  When she was released and weak from atrophy and immobilization, the doctors told her mother that she’d never walk again.  My great-grandma wouldn’t accept it. She had six children, was poor and wanted a better life for her child.  And she was an immigrant; she believed in a better life.  She made my grandma start moving right away even though it hurt. She massaged her legs day and night without being told to.  There was no internet to tell her movement and massage could help.  She tried something she thought might work because she had the choice to try even if she failed.

When I was a kid and my grandma was in her 60’s she walked three miles a day, even in the rain.  She clung to movement and to this day swears by it for keeping her healthy.  She’s 88 now.  She doesn’t walk three miles anymore.  She gets tuckered easily (did you notice I said she’s 88?).  But I’ve seen her get up and down off the floor with ease to grab me a cook book, and she has sat on my large stability ball comfortably and laughed.

I want to be like her when I’m 88—alive and active, even if I get tired more easily.  She is my inspiration.  And it’s her story that motivates me to move.  The different lives of my grandmothers inspire me in different ways.  But I want to be the one who is 88 and still moving.   I believe we always have a choice.  I choose to move.