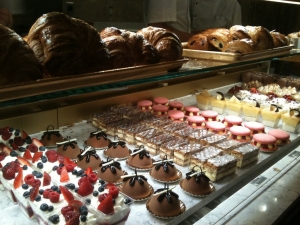 So I somewhat selfishly convinced about 20 people to try going sugar-free with me for the month of February.  This didn’t mean we ate sugar-free products.  Instead we gave up desserts, sugary snacks and sugary beverages.  Alcohol was allowed to convince more people to partake. (The pictures are just some of the foods I passed on during the month.)
Having a group involved was definitely more fun than going along.  And my boyfriend, Matt, join me as well, which always makes passing on food easier.  I got mixed feedback from people though.  Some loved it.  They didn’t like not having sweets, but they enjoyed challenging their willpower.  This was really an aspect that I hadn’t considered, but it is important to give our willpower a workout.  Others felt crabby.  And while it’s not fun to feel crabby for a whole month, the fact that skipping sugar makes you feel crabby says a lot.
I was hoping that month off would help kick the sugar habit I’d seemed to have gotten into, but I’m not sure it has.  I almost can’t wait till this Friday when I can have sugar again.  And there is a huge part of me that doesn’t want to eat it because I’m scared I might just binge.  I’m considering making some person guidelines like one dessert a week or no desserts Monday-Thursday.  In part, I don’t feel the cravings for sugar the way I did, I just want to have fun sharing good food with friends.  Food is the center of so much that we do together. 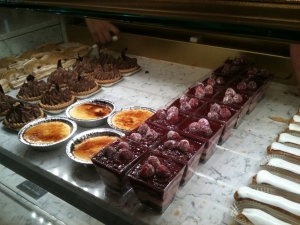 One thing I realized is that passing on sugar meant that I passed on a good deal of food I would have tried otherwise, especially when I was on vacation in Disney.  Saying no to the food, really made me realize just how much I actually eat.  It’s crazy.
I also ate a lot more fruit than I normally do.  And while fruit has sugar in it, at least it’s healthy sugar.  Sometimes I even put a little homemade whip cream on it (without adding any sugar to the creamy concoction) and I didn’t even miss the sugar.  That’s why it’s good to try these challenges sometimes.  I didn’t know that I’m happy with whip cream without sugar.  Going forward I won’t add sugar to my whip cream.
Studies have shown that rats addicted to cocaine will choose sugar over the cocaine they are already addicted to.   I think about that a lot.  And I hope that every February I make the decision to give up sugar.
Personal Euphoriahttp://pilatesct.com/
[/fusion_builder_column][/fusion_builder_row][/fusion_builder_container]
Maggie Downie2017-09-12T19:34:28-04:00