Matt thought we were just going to feed the bees so he’d only collected a little material for smoking.  My plan was to pull out multiple frames, look for the queen, check to see that the frames were full with brood or honey and decide whether to add the first honey super.  Our bees are jam packed into the hive like I’ve never seen before.  They are clearly doing well.  But, since I hadn’t communicated my plan to Matt, we ran out of smoke after feeding and checking one heavy-with-honey filled frame, and we opted to close the hive. 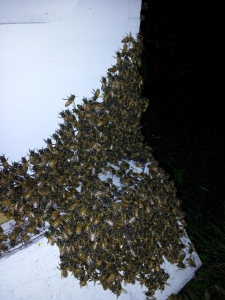 I’d taken off my gloves and netted face mask when I realized we needed to change the entrance reducer.  When you first get the bees you block off most of the entrance to the hive, so that unwanted critters don’t get in and so that the new bees, busy trying to grow don’t have to protect such a large opening.  There were so many bees that we needed to give them a larger entrance, but we didn’t want to completely remove the reducer because in a nectar dearth more critters might come to steal their honey.  So we were basically swapping out one block of wood for slightly smaller block of wood.
I wasn’t thinking about how the entryway to the hive is where all the guard bees (the most aggressive and protective bees) reside.  I wasn’t thinking of the propolis they use to stick everything together making it impossible to quickly swap any piece of the hive out with ease.  I didn’t even consider putting my gear back on.  This was going to be a quick and easy job.
Luckily Matt had grabbed the hive tool so I was able to pry out the old entrance reducer no problem, but then, go figure, the entrance was filled with bees. It was as if the entrance reducer had been holding them in.  Bees seemed to be falling out of the hive. They were everywhere.
Instinctually, I blew on the bees.  And up they went, many guard bees, directly into my face, which I quickly covered with my hands, which they quickly stung—my right ring finger by the top knuckle.
Note:  I have a flare for the dramatic.
It was like I’d been struck with a bullet in war.  I went down to the ground, tossing the new entrance reducer into the air, gripping my now throbbing hand and hollered to Matt, “Finish the job, Man!”  I lay there rolling on my back, moaning until I could get my act together enough to pull the stinger out.  At which point, guilt from my own stupidity ran through me, there was the stinger with the little, gooey entrails of one of the poor bees I’m supposed to be raising.  It’s why honey bees die.  When they sting it rips out their innards and abdomen.  I felt bad.
That’s when I heard buzzing right by my ear.
I ran to the front of the house, shaking my head frantically (what must the neighbors think?).  There was still a constant buzz.  It was stuck in my hair.  I gave my head and hair a good shake and went inside.  Still buzzing.  I quickly ran for a towel and turbaned my hair as if I was getting out of the shower and then slowly pulled the turban up in an attempt to protect my entire scalp.  The pitch of the bee now trapped in the towel lowered to a hum.
I ran back outside and did what any sane person would do.  I lied down again and started called for Matt.  “Help, me.  Help me.”  I had one hand desperately holding the towel.  As I watched my ring finger swelling I called to him, “I think this is what arthritis feels like…It’s spreading to my pinky…Soon I won’t be able to feel my whole hand…How does something so small hurt so bad?”  Following and interspersed with various moans and whines of agony.
Matt, having replaced the entrance reducer and solved all the problems of the day thus far came to my aid.  I was having visions of the time I had to call for Matt’s help when I got myself caught, naked, hanging by one ankle from our ceiling trying to use the yoga swing.  Clearly, we should not have these kinds of toys in our house.
He approached me and accessed the situation.  Matt seemed to think we should just carefully unwrap the towel and let the bee fly peacefully out.  My rational response?  “No, I smell like bananas.  I smell like bananas.”  I just kept repeating it.  “Okay,” Matt responded unclear as to how it related.  What Matt had forgotten was that when a bee stings something it smells like bananas so that the other bees get the signal to be on guard and attach the thing that now smells like bananas.  Bananas and bees don’t mix.
My plan was for Matt to go get something large and beat my hair and the towel with it until the buzzing stopped.  Matt thought it would look really bad for anyone walking by and the neighbors if I lay on the ground writhing in pain and he beat just above my head with a four by four.  Plus, he wanted to save the bee.
Matt opted for his own plan, which I was pretty sure meant preparing for another battle wound for me.  As he unwrapped the towel I just shook my head while quietly mumbling, “The bananas, the bananas.”  It was the repetitive holler of the inevitable.  I knew I was going down and there was nothing I could do.
But , then…hope.  “Oh, look,” Matt said.  “The bee is finding its way out all by itself.  There it goes”  Could it be?  Once free the bee promptly headed directly for Matt’s face.  Bees know to fly around the eyes to warn people not to come to close.  It then directly flew to his ear and stung him.  Matt remained far more composed then I, and I was now free to completely wallow in my swelling digit.  We were down another bee.
Personal Euphoria﻿
Maggie Downie2017-09-12T19:31:30-04:00