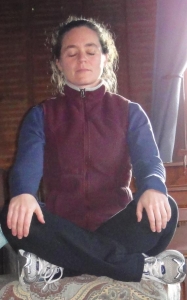 Recently in my struggle to meditate, a client suggested that I try linking meditation with something I do every day like putting my shoes. That seemed like a brilliant idea, but the problem sort of was I don’t really want to meditate. I’m not motivated to do it. Her suggestion was that I try for five minutes. I suggested two minutes.

Honestly, I don’t think I really thought I would do it, but I surprised myself. Two days later I put on one shoe, remembered this should be a reminder to meditate, and so with one shoe on I sat down and began to breath and repeat two words over and over. When I opened my eyes, I had barely lasted two minutes. But I’d done it.

Although, I have to admit, the next day I forgot to do it entirely.