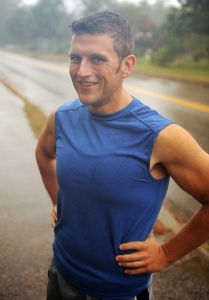 Nick Miller and I went to high school together. Since then we have found each other on Facebook, and he has been such an inspiration to me. I’ve been debating whether or not to run the Hartford Half Marathon based on how I feel. And then I read this article on Nick and once again he inspired me. I have no excuse.

I was interested in what Nick said at the end of the article in the New London Day about change and challenge. At first I was stunned because I spend a good portion of my life trying to convince people that starting small is worth it. I’ve even tried to convince people to start smaller because sometimes if you take on too much at once you can get injured or it will be so overwhelming you won’t stick with it. Small steps really can make a big difference. And if you go from doing nothing to walking even 20-minutes a day, you will start to lose weight, assuming you don’t change anything else. Small steps may take more time to make a dent, but they can also make a huge difference. You have to start somewhere.

That being said, I really liked Nick’s use of the word challenge. I have found this year that having a goal and a self-created challenge really motivated me to work out in ways and at times that I wouldn’t have. I am positive I wouldn’t have run 12 miles this year if I didn’t start training for a half marathon. There would have been no point. Your challenge doesn’t have to be a half marathon or a hike down the Grand Canyon, but if you find a goal that truly motivates you, I really think it will help you stick to your fitness plan.

Kudos to Nick for finding what worked for him and sticking with it. Let him motivate you.