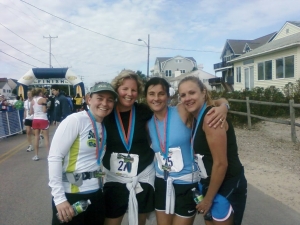 When I was 25 I ran a marathon. I’m proud of that, but I foolishly ran it without training, so training properly for a half marathon, while a much shorter distance, was a whole new experience for me. I didn’t know what to expect. I wanted to set a goal that was more than “just finish the race,” like I said when I ran the marathon, but I had no idea how to guess what my pace would be. I wished that I could run it in under 2 hours, but thought that was unrealistic. I hoped to do 10-minute miles, but thought that was highly unlikely. I wanted to at least to 10-minunte, 30 second miles. I thought that would be doable but hard.

I ran the race in 2 hours and 6 minutes (a 9-minute, 39-second mile). I was so proud. Luckily for most of the race I was running with people I had been training with all along—good conversation serves as a great distraction. 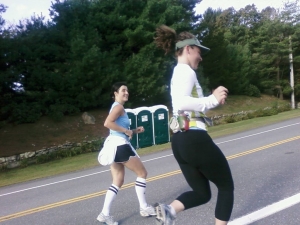 The first three miles felt really tough. I remember thinking it was going to be a long race. Mile four through ten felt great. It wasn’t until mile ten that I started to think I’d been running for a long time. Mile 11 and 12 were the hardest (stating the obvious). I felt tired and sore and knew I wasn’t going to give up but really wanted it to be over. At the very end I felt like I was sprinting, but I was probably going my normal pace. I was just happy that I did it.

I was a little sore the rest of the day, but by 9am the next morning I was good as new and felt great. I attribute my lack of soreness to all the training. Unlike when I ran my marathon and could barely walk for three days and hated running for about a year and a half, I was ready to run again three days later. 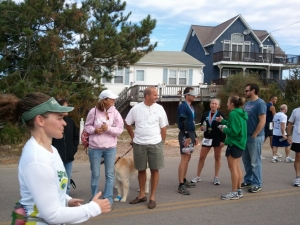 I am so happy I decided to do these challenges throughout this year. I know I’ve said it before, but I can’t recommend it enough. Now the question is, do I run the Hartford Half Marathon? If I get under 2-hours, I’ll be thrilled, but if I do worse than I did in this last race even if the course is harder, I’ll be totally bummed. So do I stay on a good note and not risk it or risk it?
Personal Euphoria
Maggie Downie2017-09-12T19:31:46-04:00