Do I Deserve Praise? 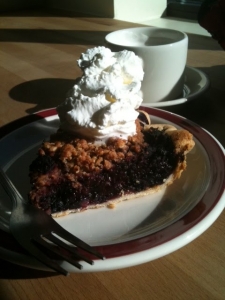 My month of no dessert really wasn’t that hard. I didn’t lose any weight so I’m not sure how it benefitted me except to say that I did it and used my will power. The problem is I’m always better at saying no to a particular food if I’ve banned it. I’m an all or nothing kind of girl. My great-grandma used to be really good about restricting herself to two cookies a day. This is a gene that didn’t get passed down to me. I’m more apt to eat no cookies or a bag of cookies. This is why I try not to keep this kind of food in the house. And why I feel insanely lucky that I like to exercise.

On the couple of days when I passed on a dessert that seemed really good—like my Grandma’s birthday death by chocolate, or the butterscotch pudding in Seattle, or the coconut cream pie by Tom Douglas that people online seem to rave about, I posted my on Facebook a picture of what I didn’t eat. I would get a stream of comments about how great I was and what willpower I had. I think someone might have even mentioned that I deserved a sainthood, which might be going just a little far.

And then a friend who I have known since nursery school asked a good question. Why did everyone feel like I deserved praise for restricting a particular food from my diet? It’s a good question because it really stopped and made me think. Why was I getting applauded, and did I deserve it?

Ultimately, I kind of think I do, and it sure felt good and gave me a little boost on the dessert passes that were more difficult. I may never taste the best coconut cream pie in the world, but I have a cheering squad—take that Tom Douglas (who is a famous chef and author of many cooking books and seems to have a national cheering squad of thousands, but who’s counting).

No one would have praised me (seriously anyway) if I restricted vegetables from my diet for a month. That wouldn’t have benefited me in anyway. By giving up dessert I was doing something healthy.

And, everyone who sent me praise knows how hard it is to say no to certain food. Our bodies crave foods, and salts, fats and sugars are especially addictive. We want to eat, and our culture and society push food on us. No one tries to feed us to be mean, it’s who we are. Italian grandmothers aren’t trying to make us fat. They are trying to show us their love through their wonderful pasta dishes.

Not once during the entire month did I pass on dessert without a reaction. After a family dinner when I was offered dessert and said no, people were stunned. Why aren’t you having dessert? Don’t you like it? And when I explained what I was doing, I think some people thought it odd, others funny. Either way, I became the brunt of some jokes, which doesn’t bother me in the least.

And the truth is, even though not having dessert this month was pretty easy, I wanted it all. And if I hadn’t banned it for the month I would have eaten it all, to some degree without much thought.

Perhaps we don’t necessarily deserve praise for the things we should do. And we SHOULD all eat well and feed ourselves good and healthy foods in moderation. Dessert has a place in a healthy world, by the way. When I stop eating before I’m full, I don’t deserve praise. It’s something I should be doing anyway. It shouldn’t be noteworthy, but it is because many of us don’t stop eating when we should. It’s hard to say no, especially to foods that are sweet and delicious, and I’m happy to accept every “Atta Girl” I get along the way.

That being said, I’m glad my friend made me stop long enough to remind myself that healthy food choices should be the norm. And I’d like to make them more the norm in my life rather than having to “ban” something in order to be healthy. That being said, I know great eating choices don’t come easily to me and I’m willing to accept that I might have to trick myself in certain ways to eat better. And when I succeed, I’m happy to accept praise and even sainthood if you’re offering.