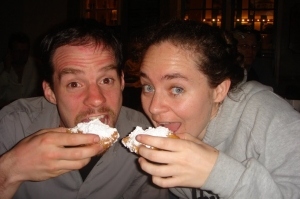 I rather exercise more so that I can eat as much as I want. That being said, I notice that when I eat better, I feel better. Load me up with vegetables, limit my sugar intake, provide me with ample sleep and I feel like I can rule the world. I definitely feel the difference when I’ve over eaten or munched on too many carbs or desserts.
So once in a rare while I feel an urge to juice vegetables and drink them–not because it tastes good, but because it is good for me. While I like veggies, I often have a difficult time drinking them. My sister Kate could live on various green juices, but I need to add some fruit to my juices in order to get it past my delicate palate. Kate can drink anything that looks and smells like grass with a smile. I do it begrudgingly, make all sort of noises and tease my sister for smelling like dirt. (It’s fair. She said I smelled like soggy cereal when I was born.)
So last week I went to the grocery store to pick up some items to juice. I wasn’t thrilled about it, but I thought my body would really thank me. I pulled out my juicer, washed everything and went to start juicing when I noticed smoke pouring forth from said juicer. My juicer didn’t squeeze a drop of juice out before it was officially unable to turn anymore. It was odd, it sort of melted itself.
So there I was, saved from the green stuff and, quite frankly, not even a little disappointed. I don’t recall what I ate instead, but I think pasta was probably involved. Pasta that I ate with a grin no doubt.
Until today when I thought a green juice might just hit the spot and realized it is probably time to start looking for another juicer.
Maggie Downie2017-09-12T19:32:03-04:00