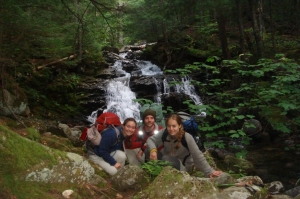 On the second day of a recent hike, we stuffed our packs and headed up the mountain once again. We wanted to reach the top of Mt. Madison (elevation 5,367 feet). The night before the weather predicted was ice and snow, so when we woke up and found the weather to be gray, chance of rain and winds of up to 65 mph, we were actually pleased.
Once we’d gotten above the treeline, where views were only popping up occasionally when the clouds and fog would disperse, roughly 40 mph winds were a constant. I was chilled to the bone whenever I stopped for a break. Moving was the better option.
After lunch we decided to go the last half mile up to the summit of Mt. Madison. I was excited and the wind was really blowing. My sister and I climbed over one rock, approximately 100-feet from the summit and the wind nearly knocked me off the my feet. Kate my sister and I grabbed onto a rock. In one step the wind had increased to the 65 mph on the weather report. Matt stepped up to the same spot and the wind whipped the wool hat he was wearing off his head. We watched it fly over the side of the mountain.
I debated. I wanted to get to top, and I could see it right there. Other people were going, but my gut (or my nerves) told me I should keep going. All I knew for sure was that if I didn’t continue, I would definitely have the chance to return, but if I went even only the additional hundred feet, I may not have the opportunity to go again. So Matt went the few extra feet and my sister and I hung back. It was a tough decision. You put a lot of effort into a hike and it’s thrilling to get to the top. But when your nervous–really nervous–it’s a little less fun. There is a level of wind that is exciting and a level that turns me off–apparently the difference for me is somewhere between 40 and 65 mph. 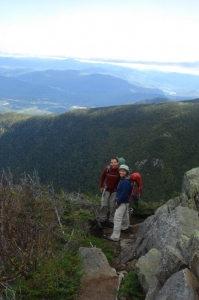