(This image is from the day I officially became the shortest in my family. I’m not positive of the year, but I’m going to guess my brother is 12 and I’m 22–give or take a year for both of us in either direction.) 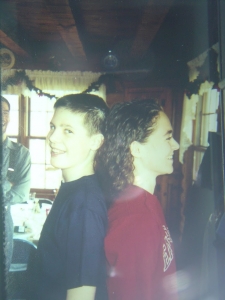 Though I have 5’3″ on my license because I prefer odd numbers, I always believed I was 5’2″. When I stopped growing at 5’2″, I was bummed. It sounded really short. And I certainly didn’t like being the shortest Downie in my family, especially because I’m seven and ten years older than my younger siblings.
But even though 5’2″ didn’t seem tall, I never felt short, and, eventually, I grew to like that feeling–feeling taller than I was. I came to see the many benefits of being vertically challenged. If it rains, I get to stay drier longer than tall people, to name one.
So it came as a huge surprise about a year ago when I had a doctor’s visit and discovered I was 5’4″. I was stunned and happy because I assumed I was living proof that Pilates really does make you gain an inch. I needed confirmation. I went to the doctor who had told me I was 5’2″ roughly ten years ago and asked how tall I was at my first appointment.
“Almost 5’4″.” was the response. Hmmm? I have no idea where or when I decided I was two inches shorter, but as the reality of my height set in, I became disappointed. I was no longer a tall girl living in a short girl’s body. I was actually average height (or what I think is average). That sense inside me that was telling me I was taller was actually right. I wasn’t 5’2″ after all.
Then I realized that I wasn’t happy when I was 5’2″ because I wanted to be taller. When I was finally 5’4″ I was disappointed because I liked feeling taller than I was. It made me wonder, are we never happy with ourselves? Maybe I should just stick with what’s on my license and split the difference. From now on, I’m 5’3″ and perfectly happy, even if living in a fantasy.
Maggie Downie2017-09-12T19:32:11-04:00