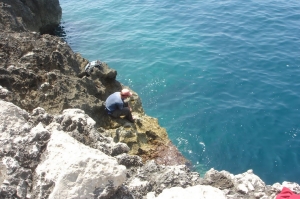 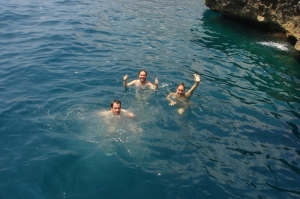 Before a dip in the Blue Grotto while on Capri, we took a lengthy hike in the hot, hot sun. Towards the end of the hike we were supposed to be able to hike down (which means we’d have to hike up later) to the water and swim in the blue waters off the shores of Capri.
We agreed it was totally worth the extra hiking, and so we descended steps cut into the cliff face to get to the water. There were two beaches where you could swim, but each place required an 18 Euro fee per person to swim. That’s pretty steep, especially since we only had about 15 minutes to hang out before we needed to head back. We asked if they could give us a discount since we were only staying for a bit and the answer was no. Our answer was also no. We’d wished our guidebook had mentioned the fee. $25 per person to swim for 15 minutes just wasn’t worth it, but we weren’t about to let that stop us.
We found a nook between the two beaches and jumped in. Instead of walking in from a sandy beach we had to jump off some jagged cliffs, so we left our shoes one so that our feet wouldn’t’ get cut up. After hiking the water felt like we’d died and gone to heaven–a heaven filled of salt. It was wonderful–cool, but not cold and we nearly floated. It was fabulous.
And then I realized that I was glad our guidebook had failed to mention the outrageous price. Had we known the charge upfront we may not have wondered down. And truth be told, our little adventure was better than had we gotten to just stroll right into the water.
Maggie Downie2017-09-12T19:32:11-04:00