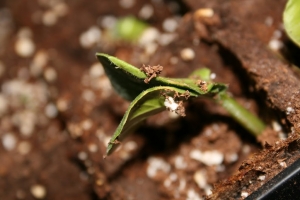 So I planted five giant pumpkin seeds with the thought that if I planted five one might survive. I assumed one would never sprout, one would die when I moved them outside, one would get eaten by something, one would do something unexpected and we’d wind up with one really large pumpkin.
I planted the seeds with a bunch of other wildflowers and sunflowers. A day later everything else had sprouted. A week later everything was at least an inch tall. I was bummed–none of the pumpkins seemed to make it.
And then yesterday, two pumpkins sprouted. And today all five have sprouted and one is an inch tall. It’s growing so fast. So so far, I haven’t lost any in the sprouting season. I’ve realized I’m not sure what to do if all five pumpkins survive and I have five giant pumpkins. I guess like life this story is to be continued. For now, I’ll just be excited about my little sprouts and not worry about the future.
Maggie Downie2017-09-12T19:35:25-04:00