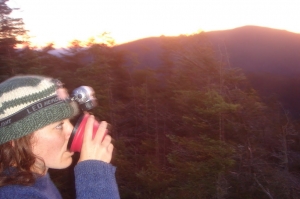 It was my first overnight hiking trip–the highest I’ve ever camped (around 4,000 feet above sea level). Each day began like a Comedy of Errors.
Day One: Up before sunrise, thankful for full moon to help me see, broke camp in the dark (and what I thought was cold), filled the Honda Fit with rucksacks and other gear, started to drive to trail head, realized I hadn’t closed the hatchback, heard a thud, stopped car, got out, reloaded the car with all the gear that fell out of the open hatchback. Felt confident that hike would go well. 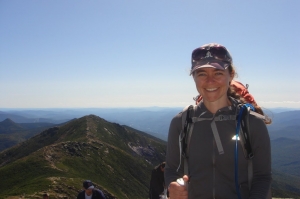 Day Two: Up before sunrise (in hope of seeing sunrise), thankful for full moon, wandered into woods to get food suspended in trees in an attempt to outwit bears, was warned by other campers to watch out for their clothesline so as not to be decapitated, so worried about clothesline I walked into a sharp shard of tree branch still attached to the tree, impaled my pectoralis major, tried not to yelp so as not to wake up other campers, was useless in the attempt to help get food down since I was too busy considering the possibility that an impaled pec muscle might make my bosom deflate, got the hot chocolate I promised my fellow hikers I’d provide for watching the sunrise, proud of myself for finding really light Swiss Miss, waited for water to boil, got really excited about hot cocoa because temperature was below freezing and woke up with ice covering my tent, still cold, giddily poured packet of cocoa mix into first cup, got ready to pour second packet, emptied second packet, realized that this hot cocoa weighed the least because two of the four packets contain marshmallows instead of hot cocoa, utterly disappointed, four people shared two hot cocoas while enjoying a full-spectrum sunrise followed by a challenging hike with superb views.
It was a good hike and a good day.
It was a wonderful trip.
Maggie Downie2017-09-12T19:32:31-04:00