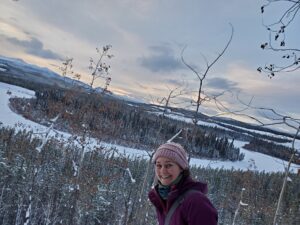 I saw an image of frozen hair styled like a Dr. Seuss character. After following a trail of links I discovered the Crazy Frozen Hair Contest in Whitehorse, Canada.

Obviously, I wanted to participate. Who wouldn’t?  But Whitehorse is fairly far from Connecticut so for seven years I convinced myself not to go because with layovers it was about 15 hours of travel and in the dead of winter snow was likely to get in the way.

Then this year, I said, “no excuses.”  We made plans and booked a trip to Whitehorse breaking up the travel with three days in Vancouver on the way out.

For hair to freeze you need -20C or lower (that’s -5F). At Takhini Hot Springs where this event is held annually you dunk your head in the hot spring and then leave your head above water while trying to freeze your hair without getting frostbite on your ears.

According to staff at Takhini at -20 it should take 45-minutes, at -40 (where Celsius and Fahrenheit meet on the scale) 20-minutes. From Vancouver I watched the forecast. While we were in Vancouver it was -35 or colder in Whitehorse […] 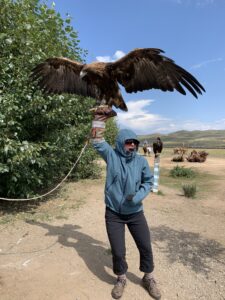 A documentary called the Eagle Huntress inspired me to go to Mongolia. It’s a film about a young girl who wants to be the first eagle hunter in Mongolia in a world where that role is passed from father to son. It’s a beautiful movie. I highly recommend it.

Along our travels, unexpectedly, at a tourist destination there was an opportunity to hold a golden eagle. Matt jumped at the chance. I wanted to hold the massive bird, but was desperately afraid. The wingspan of these giant birds is wider than I am tall. As we walked around the site, I kept thinking, “if I leave this country without holding an eagle when I have the chance, I will be so mad at myself. I have to do it.” I told Matt. He’d help me get the job done. Accountability and support from those we care about can help us do many things we are unsure we can manage.

My fear was that the bird would peck out my eyes or tear off my ear, so I wanted those areas protected. I put […] 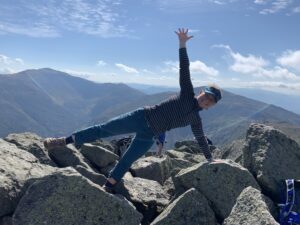 Five years ago I was hiking Mt. Adams in the White Mountains, but I turned back about 60 feet from the summit because high winds made me struggle to stay upright.  Those 60 feet mattered so I never checked it off the list in my attempt to climb all the 4,000-footers in New Hampshire.

Recently I decided to try again.  To make things interesting I opted to take King’s Ravine trail, known for being one of the more challenging trails in the White Mountains.  It is on the Terrifying 25 list.  That means it has slides, rock scrambles, and boulder caves.  It sounded fun.  Plus it had an option to detour onto a trail called the Subway which provided the opportunity to climb over rocks, squeeze through some tight tunnels, throw your pack up on a rock and spin around underneath it and pull yourself though and then grab your pack and continue on.  We were all scrapped up after the Subway but smiling and pleased with ourselves.

That morning before we knew the fun of the rock tunnels, we were greeted at the trailhead by a legitimate-looking […]

Movement is what enables us to do all the things we enjoy in life.  Eating is movement.  Breathing is movement.  Talking is movement.  For me, one of my favorite ways to move it to travel the globe.  Here is a sampling of some of the travel sites that still make me smile when they cross my mind: 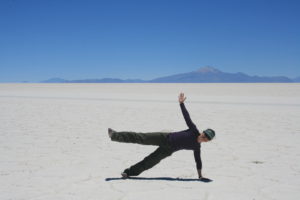 Stand in the center of the salt flats and all you see is white to the horizon line.  You can play games with perspective in pictures.  I’d love to return in rainy season when the white salt with a layer of water reflects that sky and people upon it. 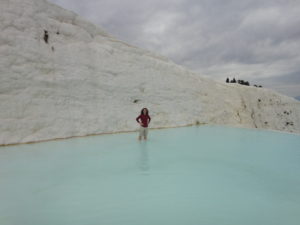 As you approach the hot springs it looks like people are soaking in snowcapped inlets on a mountainside.  The reality is more like hard baking soda surrounding warm blue baths.  It’s quite unique.  In Yellowstone there is a smaller version of something similar […] 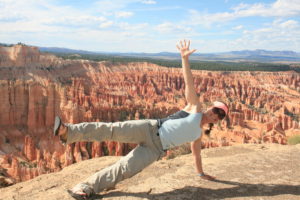 Traveling is one of my favorite ways to spend time.  But with the adventure of seeing the world comes a lot of small, confining spaces that force you into a seated position for hours on end.  When you need to fly, drive, hop on a train, or find yourselves in a dirigible, how can you keep moving in tiny spaces?

Tips for Moving in Small Spaces

I think a key factor in moving is not to worry about what other people think.  When you travel whether you pull over at a gas station, find a corner of a busy airport, or head to the back of the plane to stretch, people are going to see you doing something most people don’t do.  I always tell myself that I’m going to feel better than all the folks just sitting there.  That’s how I get over it.