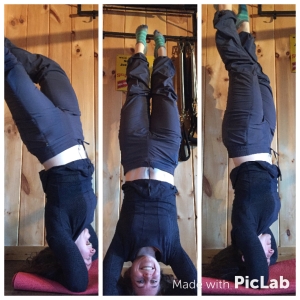 After agreeing to attend an Ashtanga yoga class for the first time, I recieved an email of the movements we’d be doing.  When the attachment opened, I started laughing.  Half the starting positions looked impossible.  I had visions of the teacher helping me into a headstand and walking away as I toppled over taking out the other participants in a domino effect.  Sometimes I worry when people presume I’ll be good or like a certain type of movement.  I think because I’m good at Pilates people think I’ll be good at yoga, kick-boxing—all of it, but I’m not.  When I was younger and was good at field hockey people presumed I’d be good at other sports, but I wasn’t.  It requires a lot of practice to get good at anything.

I went into the class with all sorts of preconceived notions and misconceptions. Chanting turns me off because I can’t carry a tune.  I’m worried about over-stretching, and I presumed the class would have a lot of over-stretching.  I was wrong.  The client who told me about the class mentioned that the instructor […]