Mt. Schilthorn: I Earned It! 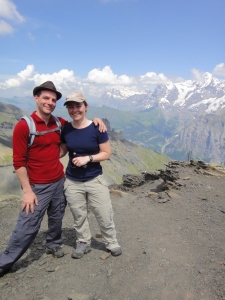 Matt and I were in Switzerland a couple of weeks ago. Oddly enough, even though we were going to be staying in the Alps, I hadn’t planned on taking any big hikes. I’d thought we’d keep it small, but with the views of all the snowcapped mountains it was hard not to want to scale right up them. I’m a hiker and don’t really have a desire to rock climb on vertical edges that are over 10,000 feet in the air, but when you stare up at Mt. Eiger, the peak sure does tempt you.

So one day we took a cable car up Mt. Schilthorn (a peak most people have only heard of because James Bond: Her Majesty’s Secret Service was filmed there), which is nearly 10,000 feet. On our way up we saw a couple people hiking. Mt. Schilthorn is not not Mt. Eiger. It’s more like Mt. Washington. I was disappointed that we hadn’t hiked it. “Oh, if we had hiked up here, then we really would have earned breakfast,” I said to Matt. 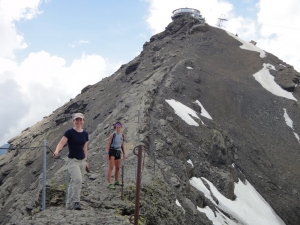 After breakfast we came down and went on a short hike. After about 30-minutes we got to a town and Matt looked up at the path to Schilthorn and asked if I wanted to go for it. I was torn. It was noon, and Schilthorn is pretty equivalent to hiking Mt. Washington. Normally when we hike Mt. Washington if we are going to go up and down in one day, we’ll start at 7am. “Well, I don’t think we’ll make it to the top, but I’d like to keep walking so let’s just walk until we feel like turning back,” I suggested.

Three and a half hours later we were at the top. It was beautiful. If we hadn’t taken the hike I would have missed out on one of my favorite parts of our vacation. There is something so spectacular about being on the top of a mountain with few people around. On a nice day, you can see forever, and it is a reminder of what a beautiful world we share. 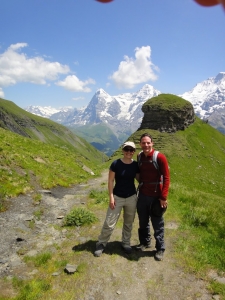 Along the way, we met another hiker and started talking. She was great company and she mentioned that in the movie Eat, Pray, Love there is a line where an Italian character says something to the effect of this:

“In Italy we eat/have fun/vacation because this is life. Americans always feel like they have to earn it to enjoy life.”

Guilty as charged, I wanted to earn those views. But I have to say when I got to the top of that mountain I was filled with a combination of humility, bliss and pride. And I think the pride comes from earning it. I was looking at similar views while Matt and I had breakfast after taking the cable car, but I’m convinced they were better when I earned it.