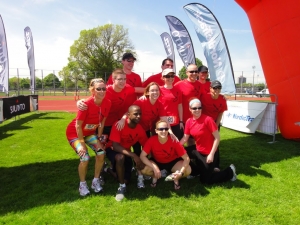 I felt completely disheartened and weak. The only thing getting me through was the fact that even with all the hills I was hoping to run a 10-minute mile (that is what I typically average), which I understood was pretty unlikely. With 1.5 to go, I seemed to be on par for a 10-minute mile and it made me feel good. But when I’d gotten to the 1-mile to go sign, I realized that the previous half mile of flat ground had nearly wiped me out and had taken me seven minutes. I was losing steam and wasn’t going to make my ten minute mile goal at this rate. I knew I wouldn’t see my team again because they had to get to the next exchange, so I only had myself to get me through. I just kept telling myself to keep running, but the person who felt like the king of the world five minutes ago who was so proud of her great accomplishments suddenly hated herself for forcing herself to keep running.
And then my heart sank with what I saw before me—a hill I’d forgotten about. Before the very end when it leveled out, I had to climb 100 feet in about a quarter mile or less. I refused to walk, but I’m pretty sure a snail could have passed me. I did pass one runner who stopped to walk, which gave me a momentary boost (thank God for a competitive spirit), but I think at the same time I was also truly hating myself.
This low probably doesn’t inspire anyone to challenge themselves in this way, but I’m still convinced it was great. And I ran up that hill without walking. I feel like moments like these show me a lot about myself and how I handle my own internal struggles. I never gave up on myself, even though I partly wanted to. I gave the very end of the leg everything I got, which felt like nothing, but I finished in one hour and three minutes. Three minutes longer than I’d hoped and a little disheartened, but thrilled to be done, and honestly proud of my mental capabilities to get me through and my body for having done it—the never ending emotional roller coaster of Ragnar. 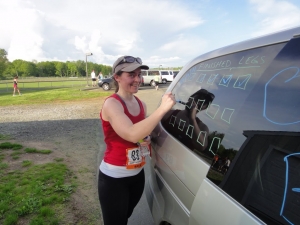 When I checked off the box for that leg (we were recording each leg we finished on the window of a van) I wrote “I kick butt” over the box. It was a couple hours later that I realized in my exhaustion I had actually written, “I kiss butt”—an unfortunate mistake, but easy to change. I had originally wanted to write, “I kick ass,” which is where I think the misplaced “s’s” came from. But my hardest leg was over and though tired, I felt great. 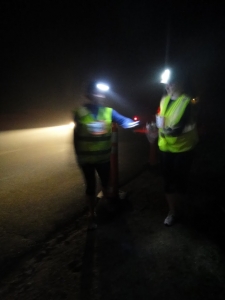 It was time for some of our runners to start running in the night—a little creepy as they were often on dark, desolate roads alone. We would drive ahead one mile, cheer them on and make sure they were okay and safe. We picked locations to stop like the cemetery one runner had to run by assuming that might be a location that would frighten someone running alone at 10pm, especially since a dense fog had descended again.

When we were done with our second legs we had about three hours to sleep in a high school gym. I didn’t expect to get much sleep in the gym, but I slept like a rock. My team couldn’t wake me up in the morning. When they finally woke me up, I was overwhelmingly excited, not the least bit tired. I had a 4am, 4-mile run ahead of me and I felt great, no nerves. I couldn’t wait to run again. I was excited to run in the dark by myself because it’s something I never do. Although morning dark is different than night dark and a lot less eerie.

I took off feeling wonderful. The run was flat, which after the previous day’s run felt like I was on a conveyor belt being carried to my finish line. I passed everyone I saw—about five or eight people. I was on fire and feeling great. For a while I was stuck in someone’s headlamp and the way it hit me I had two shadows of my body, so I chased myself, which was sort of an odd and fun feeling. Alone on the road at one point I caught myself talking out loud to myself, telling myself I was awesome (a comment I would later post on Facebook), and telling myself how proud I was of myself.
This sounds a bit silly now, but I’m glad I can have thoughts like that, silly though they may be. It’s good to feel proud and let yourself know it. We let others know it when we are proud of them. For the second time in the race, I felt high as a kite—completely unstoppable. I could have been running a 12-minute mile, but I felt great. It turned out I was actually running just under a 9-minute mile, something I have never done in my life. When I finished I felt like I’d achieved one of the greatest accomplishments, and I’ve led a really fulfilling life so far. 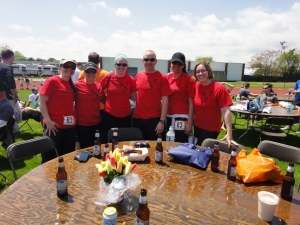 It felt better than when I’d run a marathon. After Ragnar I was overwhelmed with bliss. I felt buoyant as if the world didn’t have enough gravity to hold me down; I felt limitless and capable of anything. After my marathon, I was at first overwhelmed with sadness, hurting, and felt proud later. I don’t recall having such a feeling of euphoria that lasted for hours after my marathon. After Ragnar, I felt as hyper as a little kid who has devoured an entire bag of skittles.

I also smelt. I’d run three times totaling about a half marathon in less than a 24 hour period and I hadn’t showered once. I got in the Van and the first thing my team did was pass me some baby wipes and roll down the windows. My last run had been a piece of cake—only four miles and flat, but almost everyone else that day had to run between 5 and 8 miles and had strenuous hills. They required clean air. We supported our team until we were all at the finish line and we ran the last quarter mile together 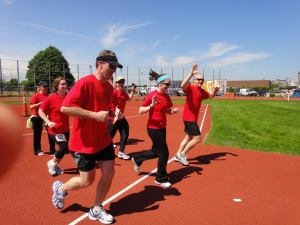 I’m not that sore, and I feel fabulous. I can’t wait until my next challenge, although I doubt it will live up to this one. I’m so inspired to become a better runner and a better athlete. Let’s see how long that will last. My next challenge isn’t too far away. I think I can stay inspired at least until then.

If you are a runner, you should run Ragnar. It is the best all natural drug. What a great adventure. But find a great team because I can now say with experience that a great team will make for a great time. I was so lucky. And I’m still so proud of all of us.
Personal Euphoria
Maggie Downie2017-09-12T19:31:55-04:00