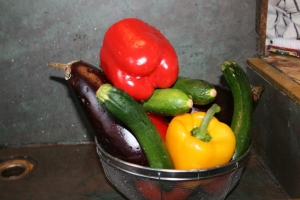 I made my first ratatouille this week. As far as I could tell if, when you are buying all the ingredients, if you don’t purchase a bouquet garni because you don’t know what it is than ratatouille is basically sautéed vegetables—not the end of the world, but really nothing special.
Although such a colorful array of veggies, seems like it has to be good, especially during the winter.
When I realized I was lacking what turned out the be the most important ingredient, I looked online and found that it’s really just a bundle of spices you cook the veggies with and then remove at the end. So I just added Wikipedia’s recommended spices for a bouquet garni and never removed them. My spices weren’t fresh, but I figured it was better than nothing.

My cookbook had a photograph of the veggies still looking quite firm at the end, but called for them to simmer for 50-plus minutes. I don’t know how you cook anything that long and not have it turn to mush, which my veggies pretty much were. Eating mushy vegetable concerned me, so I decided to turn my ratatouille into what Matt decided we should call “Crazy Bruschetta.” I brushed some French bread with more olive oil (there was plenty in the ratatouille) and garlic powder, toasted the slices, toped them with the ratatouille and a little shredded mozzarella and created one delicious meal, if I do say so myself. 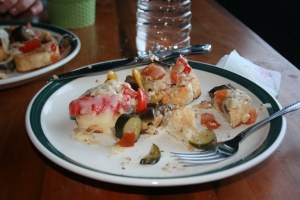 I feel like it’s easier to eat healthy when I make things that taste really good. And while there was probably more olive oil than needed and cheese in this dish, I think all the fresh veggies make it pretty nutrient packed.