All About Dragon Boat

So last Saturday was my first Dragon Boat race. If you take my classes you probably heard all about it during plank. It was awesome, especially because my team did so well and paddled together in such syncopation. 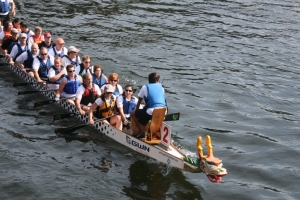 I really enjoyed the day. I especially enjoyed coming in third (with only a few seconds between us and first place) out of forty-some-odd teams, but that is my competitive spirit shining through. 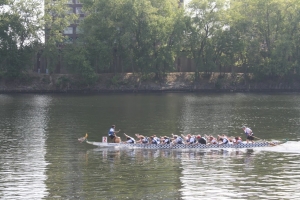 What shocked me the most was how tired I was. I’ve played sports most of my life, and, in the case of field hockey, you spend an hour on the field running around in a squat position. Once the season got going, I played in games two to three times a week and didn’t feel particularly sore after the game (and I put my all on that field–it wasn’t easy). 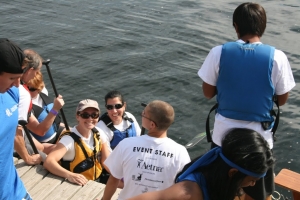 At the Dragon Boat race, after our second heat (when we had paddled for less than six minutes in total) I already felt sore. My shoulders and quads ached. They were shaking when I got off the boat. My first reaction was to think that I was really out of shape, but I’m not. I’m in reasonably good shape. My second thought was, I clearly didn’t try as hard as I should in practice. After our bi-weekly practices I am definitely sore the next day, but after 45-minutes of paddling, not 6-minutes. And I do try hard at practice. It’s my nature and I use it as a workout.
And then it hit me. I have never participated in a race. Field hockey, softball–it’s not a race. Even when I ran the 2005 Hartford Marathon, I wasn’t racing to win. I was running for my own odd need to run 26.2 miles. For the first time in my life, for less than three minutes, my body was working as hard as it could and after two rounds of that it was tired. I can’t believe I’ve gone this long in life without experiencing that sensation. It’s sort of fascinating (and thrilling). The body is so versatile. It can last for a 26.2 mile run and it can be wiped out after three minutes of all out paddling.
There is a mind-body lesson in there somewhere. Of course there is some adrenaline when there is another team racing you, but I’m not sure I could get that kind of energy into a practice race. Not for lack of trying. I just think my body would know it wasn’t the real thing. That doesn’t mean I don’t practice hard, but I clearly don’t practice as hard as I raced. Perhaps with more practicing in actual races, that soreness will fade and my body will learn how to race with as much strength and form, but without getting sore.
I won’t get to find out until next season, but I can’t wait to try again.
Maggie Downie2017-09-12T19:32:10-04:00